MORE ICONS
REAL LIFE
BIOGRAPHY
Johan” Cruyff (25 April 1947 – 24 March 2016) was a Dutch professional football player and coach. As a player, he won the Ballon d’Or three times, in 1971, 1973, and 1974. Cruyff was the most famous exponent of the football philosophy known as Total Football explored by Rinus Michels, and is widely regarded as one of the greatest players in football history. In the late 1960s and early 1970s, Dutch football rose from obscurity to become a powerhouse in the sport.

Cruyff led the Netherlands to the final of the 1974 FIFA World Cup and received the Golden Ball as player of the tournament. At the 1974 finals, he executed a feint that subsequently was named after him, the “Cruyff Turn”, a move widely replicated in the modern game.
PERSONAL INFORMATION
Full name
Hendrik Johannes Cruijff Having progressed through their youth system, Johan Cruyff made his first team debut for Ajax in 1964 aged just 17. Cruyff helped Ajax bounce back from a disappointing 13th place finish to lift the Eredivisie title the following year, before netting a remarkable 41 goals in 41 games to power Ajax to league and cup victories in 1966-67.

He was named Dutch Sportsman of the Year, an award he won again the following year after helping Ajax to a third successive league title.

Entering the tournament with few expectations, Holland lit up the 1974 FIFA World Cup™. Johan Cruyff was the catalyst as the Dutch shone playing ‘Total Football’, a revolutionary style of play which took the world by storm. Despite starting centrally, Cruyff played a free role, popping up in different attacking positions to damage opponents as the Oranje progressed to the final in style.

Cruyff’s exceptional performances were enough to earn him the Golden Ball award, despite Holland narrowly losing out. Johan Cruyff played an integral role as Ajax lifted the European Cup for the first time in their history in 1970-71. A consummate playmaker with an exceptional eye for a pass, his attacking prowess helped Ajax dominate the European stage in the early 1970s as they won three successive European Cups in a hugely successful period for the club. 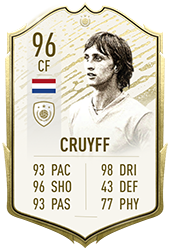