MORE ICONS
REAL LIFE
BIOGRAPHY
Hristo Stoichkov [Born February 8 1966] is a retired Bulgarian footballer and is regarded as the greatest Bulgarian player of all time. He was a member of the famous Barcelona dream team that dominated Spanish football and were also crowned European champions in 1994.

The same year, he led Bulgaria to a best ever, fourth place finish in the 1994 FIFA World Cup where he was named as joint top goal scorer, awarded the bronze ball and named European player of the year.
PERSONAL INFORMATION
Full name
Hristo Stoichkov Hristo Stoichkov began his career aged 16, before signing for CSKA Sofia in his native Bulgaria. It was here that the young Stoichkov made a name for himself, being known as “The Dagger” for his fierce competitiveness and goal scoring instincts, which helped CSKA to three league titles during his spell in Sofia.

Following a fantastic run to the semi-finals of the Cup Winner’s Cup in 1989, Stoichkov produced his finest season in 1989-90, with 38 league goals winning him the European Golden Shoe. The 1994 FIFA World Cup™ provided some of the defining moments of Hristo Stoichkov’s career. The centrepiece of Bulgaria’s unfancied “Golden Generation”, Stoichkov scored vital goals in every round of the competition to lead his nation to the semi-finals.

His electrifying performances inspired Bulgaria to be one of the most exciting teams on show at the tournament. This feat was then recognised on an individual level, as Stoichkov was awarded the Ballon d’Or for 1994, the pinnacle of his career. After joining Barcelona in 1990, Hristo Stoichkov made himself one of the focal points in the famous “dream team”, alongside Guardiola, Romario and Koeman.

Playing anywhere across the forward line, his fantastic dribbling skill and laser-sharp shooting, as well as his trademark fierce competitiveness, led to his new nickname: “The Gunslinger”. Stoichkov’s goals helped Barça to four LaLiga titles in a row, as well as the 1992 European Cup in one of the club’s most successful ever periods. 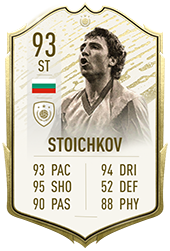