After a season and a half at Perugia, Nakata moved to Roma for a fee of over €21 million, and helped them win the Serie A title in 2001. After his successful spell in Rome, Nakata moved to Parma for a reported €28 million and cemented his reputation as one of the best Japanese footballers of all time. Nakata retired at the age of 29 following a short loan in England with Bolton Wanderers.
PERSONAL INFORMATION
Full name
Hidetoshi Nakata Known for his speed, creativity and hard-working style, Hidetoshi Nakata’s performances for Bellmare Hiratsuka earned him a full debut for Japan in 1997. Through the remainder of the year, Nakata played a key role as his country qualified for the 1998 FIFA World Cup™, their first visit to the ultimate international competition. He scored 5 goals during qualifying and claimed 3 assists in the play-off final against IR Iran. Nakata was awarded the Japan and Asian Footballer of the Year awards for 1997.
MID In 2006, Hidetoshi Nakata competed in his third consecutive FIFA World Cup™ for Japan. Having played in all three of Japan’s matches in 1998 and all four in 2002, he once again featured in each of Japan’s fixtures in 2006.

His personal highlight came against Croatia where he was named man of the match with an industrious performance. Following Japan’s game with Brazil, at just 29 years of age, Nakata announced his retirement from football. Hidetoshi Nakata joined Roma in January 2000 following an impressive 18-month spell with Perugia. His big moment came in the 2000-01 season when he came off the bench with Roma 2-0 down away to title rivals Juventus. He made an immediate impact, scoring from 30 yards before playing a key role as the game finished 2-2.

Nakata’s excellent cameo ensured Roma maintained a six-point gap at the top of the table. He finished the season with his first league success as Roma claimed the Serie A title. 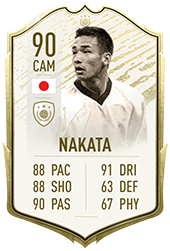