MORE ICONS
REAL LIFE
BIOGRAPHY
Henrik “Henke” Larsson (born 20 September 1971) is a striker who was born and raised in Helsingborg, Sweden. After successful spells in Sweden and Holland, Larsson really stamped his mark on the game when he moved to Scotland to join Celtic in 1997, where he broke numerous goal-scoring records.

Renowned as a player with a fantastic footballing brain, Larsson then joined Barcelona and played a starring role in their famous 2006 European final win. He made over 100 appearances for the Swedish national team and was part of the side that finished third at the 1994 World Cup.
PERSONAL INFORMATION
Full name
Henrik Edward Larsson Henrik Larsson joined Barcelona in 2004 after a legendary spell at Celtic. His time in Barcelona is remembered for the 2005-06 season, where Larsson reached double figures for goals as the club won the La Liga title.

The pinnacle of his Barça career came in the 2006 Champions League Final, as the Swede was a game-changing substitute. 0-1 down as he entered the pitch, Larsson contributed two assists to turn the game around for Barcelona, who lifted the trophy after a 2-1 victory. By the 2003-04 season, Henrik Larsson had established himself as a Celtic legend; something he confirmed in what would be the Swede’s final year at the club. His magnificent seven years in Glasgow were capped off by two goals in the Scottish Cup Final, as the Bhoys won the League and Cup double, whilst Larsson once again struck 30 goals for the year.

He left Celtic having been the SPL top scorer for 5 of the 7 seasons he was there, as well as being voted into the club’s all-time best eleven. Henrik Larsson joined Celtic in 1997, becoming a key player in the 1997-98 league title triumph. This was followed up with a Scottish League Player of the Year award in 1998-99, before Larsson had his most successful season wearing hoops in 2000-01.

The Swede scored a hat-trick and a double in the League and Scottish Cup finals as Celtic won a domestic treble, whilst Larsson himself won the European Golden Shoe. His 35 goals included a famous 20-yard chip in an Old Firm victory against Rangers. 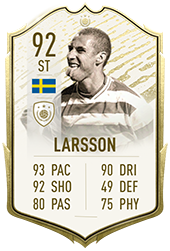