MORE ICONS
REAL LIFE
BIOGRAPHY
Gianfranco Zola (born 5 July 1966 in Oliena) was an Italian trequartista. After starting his career at Nuorese in Sardinia, Zola established himself as one of the most exciting attackers in the game. Fast-paced, technically gifted and a free-kick specialist, Zola also played for Torres, Napoli and Parma in Italy, before making the move to England, where he joined Chelsea. Gianfranco Zola joined Napoli in 1989, initially as an understudy to Argentinian legend Diego Maradona. His first season with the club proved to be a successful one as he helped the club secure the 1989-90 Serie A title.

In his second season with the club, Zola played an integral part in helping Napoli to win the Italian Supercoppa. His performances throughout the 1990-91 season earned him a first international call-up in late 1991. In 1993, Gianfranco Zola’s growing reputation earned him a move to fellow Serie A side Parma and he enjoyed the most prolific period of his career. In his first season, he helped his club to lift the 1993 UEFA Super Cup with victory over Italian rivals Milan. The 1994-95 season would also be successful.

Despite falling just short in the Serie A title race to Juventus, Zola and Parma went on to defeat the same rivals in the 1995 UEFA Cup Final. In 1996, Gianfranco Zola left Parma and joined Chelsea. Despite signing mid-season, Zola again won a trophy in his first season at his new club, helping Chelsea to lift the FA Cup in 1997.

The following year, in addition to victory in the League Cup, Zola scored the only goal of the game as Chelsea beat Stuttgart to win the 1998 UEFA Cup Winners’ Cup trophy before securing a trophy treble with the UEFA Super Cup. Further success came in 2000, as Zola won the FA Cup for a second time as well as the Charity Shield. 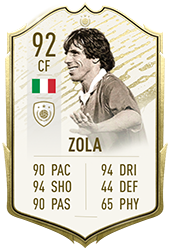