MORE ICONS
REAL LIFE
BIOGRAPHY
Gary Lineker (born 30 November 1960) is a retired English striker whose goal scoring record during the 80s and 90s in England made him one of the most prolific scorers of his time. Lineker is to date the only Englishman to win the Golden Boot award at a World Cup finals, and won numerous individual goal scoring awards throughout his career.

As well as being renowned for his crisp finishing, Lineker famously ended his time as a player with the incredible feat having never been booked through his entire career.
PERSONAL INFORMATION
Complete Name
Gary Winston Lineker The following season, Lineker lifted his sole FA Cup trophy as Spurs defeated Nottingham Forest in the final. While he didn’t score in the final, Lineker played a key role in getting Spurs there, scoring 2 goals in a semi-final win over arch-rivals Arsenal. Gary Lineker began his career with Leicester City and by the mid-1980s had become one of the most prolific strikers in England, earning him a move to First Division champions Everton in 1985. In his first season, Lineker topped the scoring charts for a second year running with 30 goals.

He continued his form at the 1986 FIFA World Cup™, as he claimed the Golden Boot with 6 goals. His form through 1985-86 earned several personal accolades, including a PFA Players’ Player of the Year award. In 1986, following a personally successful FIFA World Cup™ in which he won the Golden Boot with 6 goals, Gary Lineker joined Barcelona for a fee of £2.8m. Lineker scored 20 league goals in his first season at Camp Nou, including a hat-trick in a 3-2 win over rivals Real Madrid.

He spent 3 seasons with Barça, winning the Copa del Rey in 1988. His biggest triumph, however, came in 1989 when he helped Barcelona lift the European Cup Winners’ Cup, scoring 4 goals in the competition. 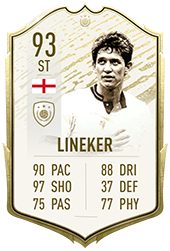