MORE ICONS
REAL LIFE
BIOGRAPHY
Frank Rijkaard (born 30 September 1962) is a legendary Dutch footballer who is widely regarded as one of the best central midfielders of all time. Rijkaard’s successful career saw him start and end his career at Ajax, winning 5 Eredivisie titles and one European medal with his home town club.

He then moved to Italy where he won a further 10 trophies whilst part of arguably the greatest club side in history with AC Milan. Rijkaard later made the move into management and claimed two La Liga titles with Barcelona, earning the UEFA Manager of the Year award in 2006.
PERSONAL INFORMATION
Full name
Franklin Edmundo Rijkaard Frank Rijkaard redefined how to go out on top. After five years at AC Milan, the Dutchman returned to his boyhood club Ajax for his career swansong. He won the league in both seasons, before bowing out in style in Vienna, venue of the 1995 UEFA Champions League Final.

Fittingly, Ajax squared off with Milan in his last match before retirement. The contest was tight until Rijkaard found Patrick Kluivert, who prodded home the only goal of the game to ensure the perfect send-off. Frank Rijkaard played predominantly at centre-back for Ajax, but was recognised early in his career as being a versatile player, and spent time in central-midfield and as a right-midfielder. He achieved great success domestically in his seven years at the club, before starring in the Netherlands’ historic Euro 1988 winning team.

Rijkaard formed a formidable centre-back pairing with Ronald Koeman, keeping a clean sheet in the final and was named in the UEFA Team of the Tournament. Having reached great heights as a centre-back, Frank Rijkaard was transformed into a world class defensive midfielder in his time at AC Milan by manager Arrigo Sacchi, who recognised his physical qualities alongside his tactical astuteness and decision making.

The Dutchman helped Milan reach the pinnacle of club football by winning the European Cup in 1989, which they successfully defended one year later. The 1990 final was particularly sweet for Rijkaard, scoring the only goal in a 1-0 victory. 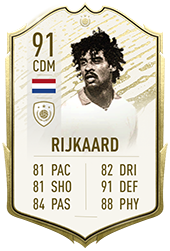