MORE ICONS
REAL LIFE
BIOGRAPHY
Frank Lampard (born 20 June 1978 in Romford) is the all-time leading goalscorer for Chelsea, where he played for 13 years. He is one of seven players, and the only midfielder, to have scored 150 or more goals in the Premier League. Frank Lampard made his debut for boyhood club West Ham United in 1996, following a brief loan spell at Swansea City. However, it was the 1997-98 season when he started to cement his place in the team.

Providing youthfulness in the middle of the park, Lampard’s seasonal highlight was his hat-trick against Walsall in the League Cup. An ever-present the following season, Lampard helped West Ham to a Premier League best finish of 5th and a European campaign via the Intertoto Cup. Despite now being into his thirties, Frank Lampard was still a dominant force in English football in the 2011-12 season with Chelsea. That success spread to the European stage in the most incredible of ways for Lampard. By the mid-2000s, Frank Lampard was at the top of his game with Chelsea and had become one of the most complete midfielders in world football. An ever-present in the league for three consecutive seasons, Lampard was an integral part of Chelsea’s first Premier League title win in 2004-05.

Lampard continued his domestic success the following season as Chelsea retained their Premier League title, and, on a personal level, Lampard was named as the FIFA World Player of the Year runner up for 2005. 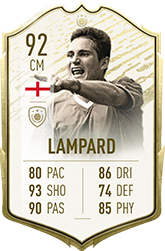