MORE ICONS
REAL LIFE
BIOGRAPHY
Franco Baresi (born 8 May 1960) is a retired one-club Italian defender. After growing up in Travagliato, Baresi moved to Milan where he joined AC, and would go on to captain the side for 15 years.

In a glittering career spanning 20 years, he carved out a reputation as one of the greatest defenders of his generation. At the age of just 22, Baresi was part of the Italy squad who lifted the World Cup in 1982, and later captained the side at the 1994 tournament. Baresi won 6 Serie A titles with Milan, many European medals and was rewarded with Silver Award at the 1989 Ballon d’Or.
PERSONAL INFORMATION
Full name
Franchino Baresi After joining the academy at 14, Franco Baresi made his AC Milan debut in April 1978 at the tender age of 17. He was immediately installed into the first eleven for the following season, playing in the heart of defence. Baresi’s first season was also a resounding success for the Rossoneri, as they won their 10th Serie A title.

The Italian’s strong influence was later rewarded, being made Milan captain at 22 years old, a post he held until retirement 15 years later. Between 1991 and 1994, Franco Baresi captained Milan to three consecutive Serie A titles, including going unbeaten for the whole 1991-92 season, a run lasting an Italian-record 58 games. Baresi won his third Champions League in 1993-94, beating Barcelona 4-0, although he was suspended for the final.

Internationally, Baresi captained Italy in the 1994 World Cup™. He unfortunately suffered an injury in the group stage, before making a sensational recovery to lead his side out for the final, keeping a clean sheet against Brazil. Franco Baresi formed part of what is known as one of the greatest defences of all time, playing alongside Italian greats Maldini, Costacurta and Tassotti, as Milan won the 1987-88 Serie A title, conceding only 14 goals.

This glorious run of success between 1987 and 1990 saw Milan win Serie A, the Italian Supercoppa and back-to-back European Cups. Baresi was named Serie A Player of the Year for 1989-90, as well as finishing runner up to teammate Marco van Basten for the 1989 Ballon D’or. 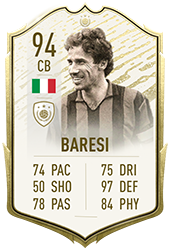