MORE ICONS
REAL LIFE
BIOGRAPHY
Filippo Inzaghi (born 9 August 1973 in Piacenza) is a former Italian striker. Renowned for playing on the shoulder of the last defender, Inzaghi began his career at his hometown of Piacenza. He later spent time at Parma and then Atalanta, where he went on to make his name and become Serie A’s top goal-scorer with 24 goals in the 1996-97 season.

Inzaghi would later play for two Italian giants in the form of Juventus and AC Milan, where scored a combined 215 goals in 465 appearances. Inzaghi scored 25 goals during an excellent international career and won a World Cup winners medal in 2006.
PERSONAL INFORMATION
Full name
Filippo Inzaghi Filippo Inzaghi had become synonymous with AC Milan by the time the 2007 Champions League final against Liverpool came around. This match was the crowning achievement for the Italian striker, as he helped Milan get revenge for their defeat by the same opposition two years previously.

Inzaghi scored both goals in the 2-1 victory to achieve a childhood dream, describing them as ‘’the most important’’ of his life. This famous night cemented his status as a Milan legend. Filippo Inzaghi soared to prominence in his year at Atalanta, becoming Serie A’s top scorer and Young Player of the Season. Juventus soon swooped to secure his signature. He made an instant impact, scoring 18 goals in his first season, including a brace on his debut to help his team collect the 1997 Italian Super Cup and a hat-trick to secure a league-clinching 3-2 victory against Bologna.

He continued in this vein for the next three seasons, ending each year as top scorer for the Old Lady. Filippo Inzaghi began his time at AC Milan in 2001, after a big-money transfer from Juventus. The Italian had honed his craft to become the archetypical goal-poacher supreme, with his predatory instincts and eye for goal striking fear into opposition defences.

The Champions League proved to be particularly fertile ground for the striker, with 10 strikes in 2002-03 on the road to an all-Italian final, where they defeated his previous club on penalties. 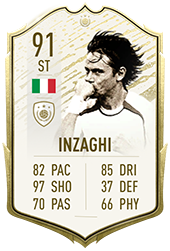