MORE ICONS
REAL LIFE
BIOGRAPHY
Emmanuel Petit (born 22 September 1970) is a retired French midfielder. During his early career with Monaco, Petit often played in defence, but cemented his position at CDM shortly before joining Arsenal in 1997. Known for his hardworking performances in the middle of the park – and with a strong left foot, Petit won the double with Arsenal in 1998.

He helped France lift both the 1998 FIFA World Cup™, where he scored a memorable goal in the final against Brazil, and the Euro 2000 title. Petit joined Barcelona in the summer of 2000, but moved to Chelsea one year later before eventually retiring at the age of 35 after succumbing to injuries.
PERSONAL INFORMATION
Full name
Emmanuel Laurent Petit Emmanuel Petit began his professional career at Monaco, where, at the age of 18, he was spotted by then manager Arsène Wenger. His early days saw Petit play in several positions – at left midfield, centre-back, central midfield and often at left-back.

He quickly became a mainstay in the Monaco team, featuring in the 1988-89 Coupe de France final where they narrowly lost 4-3 to Marseille. In 1990, he followed in the footsteps of Didier Deschamps and was named Ligue 1 Rookie of the Year. Emmanuel Petit spent a total of three seasons at Arsenal, and the turn of the millennium was an important era in Petit’s career. Domestically, his performances at Arsenal saw Spanish giants Barcelona come calling and he moved overseas in a joint transfer with Arsenal teammate Marc Overmars.

Internationally, Petit was part of the French national team that won Euro 2000, to follow on from their FIFA World Cup™ win two years earlier. In June 1997, Emmanuel Petit moved across the Channel when he left Monaco to join his former manager Arsène Wenger at Arsenal. The move saw Petit play in a deeper role alongside Patrick Vieira and it proved to be a successful change.

He won the Premier League and FA Cup double with Arsenal in the 1997-98 season, and, in the summer of 1998, he won the FIFA World Cup™ with France, scoring a memorable goal in the dying minutes of the final against Brazil. 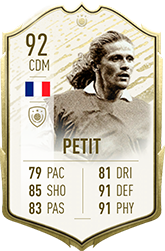