He amassed La Liga totals of 341 games and 123 goals for his main club, in 12 seasons, and represented the Spain national team in two World Cups (being the second top scorer in the 1986 edition) and as many European Championships, scoring 26 goals for his country in a record that stood several years.
PERSONAL INFORMATION
Full name
Emilio Butragueño Santos Emilio Butragueño graduated through Real Madrid’s youth system as part of La Quinta del Buitre, a group of five homegrown stars who would take the club into a period of great success.

Butragueño made his debut in February 1984, helping turn around a 0-2 deficit to Cádiz CF with two goals and an assist. The following season, the striker had cemented his place in the team alongside his former Castilla teammates as Madrid regained their European lustre, winning back-to-back UEFA Cups. Emilio Butragueño played a major part in Spain’s 1986 FIFA World Cup™ campaign. It began in qualifying, as he made a goal-scoring international debut in a win against Wales.

The Real Madrid striker started the finals off the back of a fruitful domestic campaign, as he helped his boyhood club to league glory. Butragueño scored 5 goals in Mexico, narrowly missing out on the golden boot. His stand-out performance came in the Round of 16, with El Buitre notching a remarkable 4 goals against Denmark. Real Madrid experienced a great period of domestic success in the second half of the 1980’s, with Emilio Butragueño leading the line for the club as part of homegrown quintet La Quinta del Buitre.

Five consecutive LaLiga titles contributed to half a decade of uninterrupted dominance, starting with the striker’s maiden league trophy in 1985-86, matching Madrid’s own streak in the early 60’s. Butragueño, playing at the top of his game, picked up two Ballon d’Or Bronze Balls in this time. 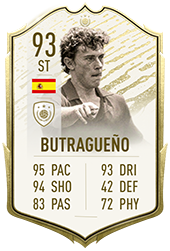