MORE ICONS
REAL LIFE
BIOGRAPHY
Diego Maradona (born 30 October 1960 in Buenos Aires) is a retired Argentine footballer. Regarded by many as one of the greatest footballers of all time, Maradona was joint winner of the FIFA Player of the 20th Century award.

During a career which included spells in Argentina, Spain and Italy, Maradona is the only footballer to have twice broken the world record transfer fee when signing for Barcelona and Napoli. Maradona scored 34 goals in 91 appearances for Argentina, winning the 1986 World Cup and the FIFA Goal of the Century award for his second goal against England in 1986.
PERSONAL INFORMATION
Full name
Diego Armando Maradona Diego Maradona burst onto the scene in the late 1970s, having made his debut for Argentinos Juniors at just 15 years old.

He was the league’s top goal-scorer from 1978 until 1980 and his performances earned Maradona a dream move to boyhood favourites Boca Juniors. There, he won the domestic title in 1981 and was called into his first FIFA World Cup™ squad in 1982. His performances at Boca ensured Maradona moved overseas to Barcelona for a then world record fee of around £5m. Maradona had his longest club spell with Napoli. There, he dominated Serie A from 1984 until 1991 and captained Napoli in their most successful era. In the 1986-87 season, Maradona’s performances helped Napoli to their first Serie A title and a second followed in 1989-90.

He left Napoli as their all-time leading goal scorer with 115 goals. On the international front, Maradona captained Argentina to a second successive FIFA World Cup™ final where they narrowly lost out to West Germany. Despite missing games through injuries, Maradona managed 38 goals in 58 games at Barcelona and helped them to 3 domestic trophies in 1983.

The highlight for Maradona during the mid-80s however was captaining Argentina to FIFA World Cup™ glory in 1986. Maradona played every minute of the tournament, scored arguably the goal of the century, and ended with five goals and five assists – the last assist coming in the final against West Germany to win Argentina the match, and the tournament. 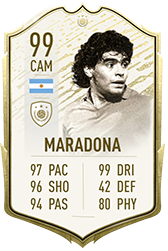