MORE ICONS
REAL LIFE
BIOGRAPHY
Dennis Bergkamp (born 10 May 1969) is a technically gifted, former Dutch striker most famed for his spells with his home town Ajax and later at English side Arsenal.

Nicknamed “The non-flying Dutchman” due to his fear of flying, Bergkamp’s career really took off at Ajax in the early 1990s when he scored 75 goals in just 91 league appearances. Bergkamp later moved to England where he joined Arsenal and became a key member of Arsenal’s “Invincibles” side. He is also remembered for scoring one of the greatest Premier League goals of all time against Newcastle in 2002.
PERSONAL INFORMATION
Full name
Dennis Nicolaas Maria Bergkamp In the late 1980s and early 90s, Dennis Bergkamp made a big name for himself in Holland. After cementing his place as a key player in Ajax’s first team, Bergkamp enjoyed several successful seasons. In the 2001-02 season, Dennis Bergkamp continued to make a big impact at Arsenal, despite having retired from international football. He featured in 46 matches that season as the Gunners won a Premier League and FA Cup double.

The highlight for Bergkamp came on March 2nd 2002 against Newcastle United, when he scored arguably the most famous goal of his career – flicking the ball round Nikos Dabizas before placing the ball into the bottom corner to secure the win. In the mid-to-late 1990s, Dennis Bergkamp was at the peak of his career. On August 23rd 1997, Bergkamp set the tone for a successful season with his excellent hat-trick against Leicester City.

Despite missing the cup final due to injury, Bergkamp was instrumental throughout the season as Arsenal won a Premier League and FA Cup double. His outstanding season was capped off when he was named the PFA Players’ Player of the Year. 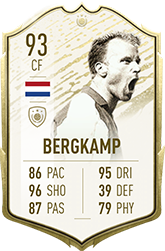