MORE ICONS
REAL LIFE
BIOGRAPHY
Deco (born 27 August 1977) is a retired, Brazilian-born, Portuguese attacking midfielder. Despite his upbringing in Brazil, Deco ended up in Portugal at the age of 19 and soon joined Porto where he made his name on the world stage.

After five highly successful years at Porto, Deco made a big money switch to Barcelona and was named Ballon d’Or runner up later that same year. After a later spell at Chelsea, Deco ended his career at Fluminense in his native Brazil.
PERSONAL INFORMATION
Full name
Anderson Luís de Souza With a decade of experience under his belt, Deco embarked on his second season at Stamford Bridge under new manager Carlo Ancelotti.

The midfielder made a telling contribution as they became the first Chelsea team to win the domestic double, bagging over 100 league goals in the process. The Portuguese international struggled with injuries over the course of the season, but when fit provided craft and guile for the big games. Deco joined Porto in 1999 and became a key member of the team after the appointment of José Mourinho, taking the club to unprecedented domestic and continental success.
A UEFA Cup victory completed a treble in 2002-03, followed a year later with another league triumph and Champions League victory. The assist machine sealed his time at Porto with a man of the match performance and goal in the 3-0 victory against Monaco in the final, and was named the UEFA Club Footballer of the Year. Days after Portugal competed in the Euro 2004 final, Barcelona secured Deco’s signature. He slotted in seamlessly, pulling the strings in a midfield three, and picked up a league winners medal in his first season at the club.

Season number two surpassed the achievements of the first, as the Spanish giants clinched a league and Champions League double, with Deco earning rave reviews from the Barcelona faithful. 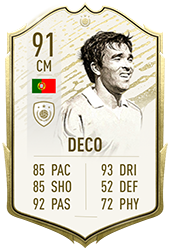