MORE ICONS
REAL LIFE
BIOGRAPHY
David Trezeguet (born 15 October 1977) began his career in Argentina with Club Atlético Platense and one season later he transferred to Ligue 1 side AS Monaco, where he would form a striking partnership with international teammate Thierry Henry.

However, it was playing for Juventus when he won more trophies.
PERSONAL INFORMATION
Full name
David Sergio Trezeguet David Trezeguet is one of the most prominent examples of world class attackers that have risen through the ranks at AS Monaco. From the 1997-98 season onwards, the Frenchman proved his abilities, most notably his instinct in front of goal, by helping his side win the Trophée des Champions and two Ligue 1 titles.

Trezeguet was also included in France’s legendary 1998 FIFA World Cup™ winning team at 20 years of age, scoring his first goal for Les Bleus in the group stage of the tournament. Italy looked set to be crowned champions of Europe until Trezeguet’s introduction late in the game, when he set up Sylvain Wiltord’s last minute equalizer, before sealing the title by scoring the Golden Goal with a thumping left-footed volley. David Trezeguet’s performance during Juventus’ 2001-02 Serie A winning season is considered by many to be his best during a successful decade with the club. Combining his incredible physical ability with his natural instinct for goal, he scored 32 goals in all competitions that season, including an impressive 8 goals in the UEFA Champions League.

Trezeguet’s brilliance throughout the campaign saw him finish as joint top scorer and named Serie A Footballer of the Year. 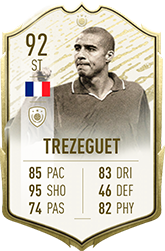