MORE ICONS
REAL LIFE
BIOGRAPHY
Claude Makelele (born 18 February 1973) was a French international for 13 years, and was part of the France national team which reached the final of the 2006 FIFA World Cup. Regarded as one of the greatest ever players in his position, Makélélé has been credited with redefining the defensive midfield role in English football. Claude Makélélé joined Nantes at the age of 18 in December 1991 and soon began to make a name for himself. He spent 6 years with the club, with the highlight being the 1994-95 title-winning campaign.

With just one defeat all season, a young Makélélé collected his first ever silverware as Nantes finished 10 points clear of second-placed Lyon. His performances for Nantes helped Makélélé progress to the French national team squad and he made his debut for France just two months later. Having revolutionised the defensive midfielder role in English football, Claude Makélélé was a key figure behind Chelsea’s success in the mid-2000s.

Providing solid defensive support for the team to allow Chelsea’s attackers to roam forward, Makélélé won his first Premier League title in 2004-05 and was rewarded with a place in the FIFPro World XI. The success continued the following season as Chelsea retained their Premier League crown comfortably. In 2000, Claude Makélélé moved from Galician club Celta Vigo to Spanish giants Real Madrid. Perhaps underappreciated at times, Makélélé’s performances in front of the back four were lauded by his teammates as the club won an impressive array of trophies during his three seasons in Madrid.

He helped Real win LaLiga in 2000-01 and 2002-03, although the UEFA Champions League win in 2001-02 was arguably the highlight of an extremely successful spell in Makélélé’s career. 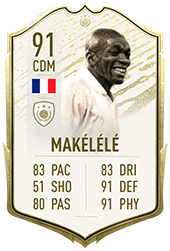