MORE ICONS
REAL LIFE
BIOGRAPHY
Clarence Seedorf (born 1 April 1976 ) was a Surinamese-born Dutch professional football, regarded by many as one of the best midfielders of his generation. He won several domestic and continental titles while playing for clubs in the Netherlands, Spain, Italy and Brazil.

He is also considered one of the most successful players in UEFA Champions League history, as he is the first, and currently the only, player to have won the Champions League with three clubs. At international level, he represented the Netherlands on 87 occasions, and took part at three UEFA European Football Championships (1996, 2000, 2004) and the 1998 FIFA World Cup, reaching the semi-finals of the latter three tournaments.
PERSONAL INFORMATION
Full name
Clarence Clyde Seedorf Clarence Seedorf began his career with Ajax, making his debut in 1992 at just 16 years of age. He helped the club to a domestic treble in 1993-94 as they won the Eredivisie title, KNVB Cup and Dutch Super Cup.

Another trophy treble followed in 1994-95 as Seedorf played a vital role in retaining the Eredivisie and Dutch Super Cup. The crowning moment of his season came as Ajax lifted the UEFA Champions League trophy, the first European trophy of Seedorf’s career. In 1996, Clarence Seedorf joined Real Madrid following one season with Sampdoria and was a virtual ever-present over the following three seasons. His first season with Los Blancos proved to be successful as Seedorf helped the club finish two points above rivals Barcelona to regain the 1996-97 LaLiga title. Clarence Seedorf joined Milan in 2002 from city rivals Inter. He made history in his first season when he became the first player to win the UEFA Champions League with three different clubs.

He later lifted the trophy for a fourth time at the end of the 2006-07 season, with further success coming in 2007 as Seedorf helped The Rossoneri win the UEFA Super Cup and the FIFA Club World Cup. His performances in 2007 earned him a place in the UEFA Team of the Year. 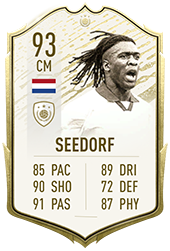