After successful spells in Spain and Italy, Internazionale paid a then world record £32 million fee for the striker, who repaid in kind by scoring 103 league goals in just 143 appearances. Vieri was named Italian footballer of the Year in 1999 and 2002 and went on to set the record for the most headed goals scored in Serie A, thanks to his incredible strength and aerial ability.
PERSONAL INFORMATION
Full name
Christian Vieri After scoring 9 goals in 21 games for Atalanta, Christian Vieri was snapped up by Juventus for €2.5m. He quickly made his mark as the club won the UEFA Super Cup and the Intercontinental Cup in 1996. He scored a total of 14 goals in his debut season and was Juventus’ top goal scorer, helping guide them to the league title as well as the Champions League final.

Vieri finished his Juventus career after 1 season with 3 trophies to his name. Christian Vieri signed for Internazionale in 1999 for a world record fee of €49m. He went on to spend 6 seasons with the club, scoring an impressive 46 goals in two years between 2001 and 2003, and finishing as the league’s top goal scorer in 2002-03.

His partnership with Hernan Crespo was lethal, firing Inter to the Champions League semi-final in 2002-03. His blend of power and pace earned him the nickname Il Toro (The Bull). After an impressive 29 goals in 32 games for Atletico Madrid and 5 goals at the 1998 FIFA World Cup™, Christian Vieri signed for Lazio for €25m. He went on to score 14 goals that season and win the UEFA Cup Winners’ Cup.

He was named Serie A Footballer of the Year in 1999, and his prolific goal scoring record led to Vieri being regarded as one of the best Italian strikers of all time. 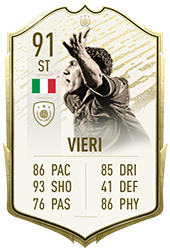