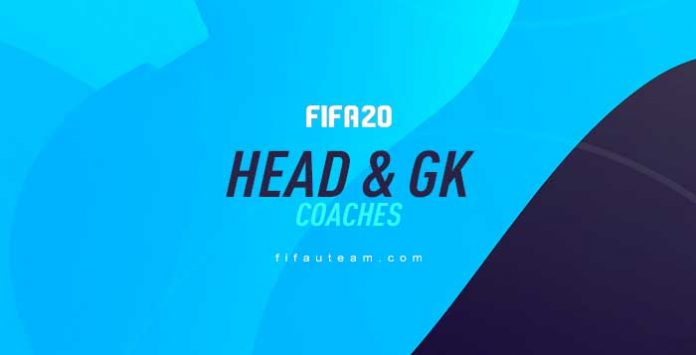 Do you want to know more about FIFA 20 Head Coaches and Goalkeeper Coaches, right? Then, keep reading.

What FIFA 20 coaches do?

Both the head coach and the goalkeeper coach cards can be understood by one explanation since they do the same thing: increase the effect of training cards.

How coaches can improve your players?

Coaches are not all the same. Their cards differ from each other in the attribute they benefit and how well they do this. Each coach benefits one of the six basic attributes of a player or goalkeeper, and for each attribute, there are several coaches with different bonus amounts (5 to 15%).

Every time you apply a training card to a player or goalkeeper, the bonus they receive depends not only on the card’s value itself but also all the coaches stored in “My Club” for this attribute are taken into account. The system automatically sums up all coaches’ displayed percentages and then give you the total bonus for the attribute, which can’t be higher than 50% because this is the maximum value possible according to the number of coaches there are in the game for one attribute.

When a training card is applied for all attributes at once, there is no difference on the way coaches work. Immediately before the six attributes are increased, the system calculates the bonus for each one of them according to their coaches. It’s important to note that the coaches do not increase the duration of the training card’s effect. It never works for more than one match. Coaches will only increase the bonus for each specific attribute.

When you are applying a training card, you can check how big is the current coach boost of your club. You just need to look to the percentage that is shown in the ‘Training Bonus’ card. If you sum the coefficients of all the coaches your club has, you should get the same percentage.

Should I buy Coaches?

The vast majority of players don’t occasionally use training cards. For them, buying these cards is clearly a bad investment. In the same way, though, for people that use training cards on almost every match, buying coaches should be almost mandatory.

For people that use training cards moderately, like when they’re playing finals or decisive season matches, this matter should be analysed according to two aspects.

Firstly, having coaches is the only way there is for you to be able to get higher attribute increases. Having all coaches for an attribute, you can get up to a +23 increase on it, provided a maximum +15 increase it’s possible for a training card.

On the other hand, everything has its costs. In general, the investment on coaches that will give an attribute a 50% bonus costs around 2,000 coins. The return depends on the attribute. It is practically insignificant for all of the goalkeepers’ attributes and for most of the players’ attributes, but it can reach savings around 300 coins per match when pace or passing are the attributes improved. In this case, the investment is paid off after 7 matches of pace training cards used.

Every single head coach and goalkeeper coach included in the game

Here are the lists of all FIFA 20 head coaches and goalkeeper coaches: