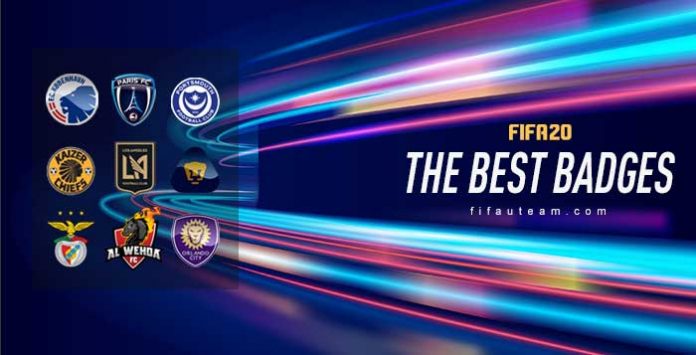 FUT is a game mode that allows you to create your own club. You can choose a name, two kits and a badge to make it unique. But not always is easy to choose among so many alternatives. We make your job easier, suggesting the 20 best badges to use in FIFA 20 Ultimate Team. Find out the most original and good looking FIFA 20 badges!

A selection of our favourite badges for FUT 20

A club’s visual identity during the season is made of three elements: name, badge and kit. You can also assign a ball and a stadium to your club but that’s not how your team will be known by your opponents.

Every club must have an active badge. It is the one that will be shown on the starting animation of every match, every pause and all menus of this game mode. They only have an aesthetic function. Many players choose to use the badge of their club preference in real life but the most wanted badges in the game are not the ones from the most popular clubs but those with a more modern and original design.

If you like a specific badge, go to the transfer market and filter by the respective club. If you need help to pick a badge, follow our suggestions. We are sharing with you which ones are, in our opinion, the best FIFA 20 badges to use in Ultimate Team.

Every year we pick a badge of a very popular team. This time we choose the world’s most beautiful badge. It’s not in the top of the list just because we don’t want to be accused of picking the club of our heart. Anyway, in three years we expect to see four stars instead of three. It’s only for the best ones.

No, this is not the Mauritania flag. It is a very simple badge, without any word. It only has the symbol of the city: the star and crescent. For the most creative ones, it is a smiling face. It is not quite popular in the west but we love this badge. The way how the orange and the blue colors blend with the tiger is simply perfect. This badge is unique! It has everything: the ball, the shield, the star, the Russian culture, the right colours… It is also one of the few that features a 3d perspective. You probably are asking what does Belgium have to do with Native Americans but there is an explanation. In the early-1900s, Buffalo Bill was the ringleader of a “Wild West” circus that toured Europe giving them a taste of the new frontier that was the wild west. His successful circus made their way to Ghent at some point and it just so happened that a new athletic club had formed and had just added a football team. FUT players want original and simple crests for their clubs and this one is a good choice. It’s just a monochromatic ram, that looks like a cartoon. It may not be a beautiful badge in real life but for your Ultimate Team club it looks perfect. If you are one of those players who think that Middle East badges can’t be modern, just look to this one or the Al-Taawoun badge. You are tempted to use it, aren’t you? We admit: we love the South African badges. They are so perfect! It’s not easy to find something wrong. Everything fits so well together: the colors, the perfect shape, the history, the font, the balls… A Sherwood tree emerges from wavy lines, representing the river Trent. That’s how it looks the Nottingham Forest badge. Oh…wait. There’s more. The two stars remind the younger ones how big this club already was. If you love nature, this is probably the best badge for your club. It’s just us, or this is one of the most beautiful FIFA 20 badges? Pure art! The way the lion fills the circle is insane. Besides that, it is also good to use a badge of a champion team. This is one of the most popular FIFA 20 badges. If you like it but want to be original, you may look first to the Red Bull Salzburg or the Red Bull Leipzig. Boosts your confidence with ‘Red Bull gives you wings’. Do we have to explain why so many players use this badge? Yes, that’s the pirates thing. It looks sick, doesn’t it? You already tried most of the badges? Don’t worry. J1 League clubs have amazing crests and you probably don’t know them. Our favourite is this one. The Orlando City crest is simple, elegant and instantly recognisable on the global stage. It merges the lion, who never shies away from an opponent, with the sun, which represents Florida, the sun shine state. It’s not easy to find a badge with a so unique colour: purple. Amazing minimalist badge. The wolf’s head, with right-angled triangles for eyes and contained within an old gold hexagon, looks brilliant. Wolves players made a brilliant season with this badge on their chests. It’s your turn to try…

We already know that you love this crest (how you wouldn’t?) but if you are asking yourself why there is a wing on it, we will try to clarify this to you. It seeks to unite team and fans under a recognizable and relatable symbol, with ties to the diverse culture of Los Angeles. The addition of the Chinese League last year, also brought an amazing badge. It isn’t exactly ‘The Best forever’ but it is close… Once again, Paris FC badge is in our top 3. They have a gorgeous badge we would like to use in our team. You should also try.

This dragon looks amazing. Now that everyone is hyped with ‘Game of Thrones’, this badge is even more on fire. If you want it, be fast. Last year, this item got extinct in the market. One of the most minimalist FIFA 20 badges. It is so beautiful that everyone should have it. By the way: this is not a lion. It’s a puma, called Goyo.