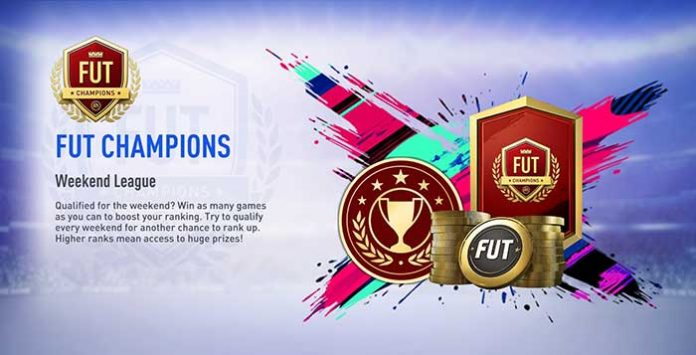 FUT Champions, and Weekend League in particular, has been a huge success. However, there are many people who still don’t know how everything works. To stop with questions like ‘why am I not qualified?” or “where is my weekly reward”, we are publishing this FIFA 19 Weekend League Frequently Asked Questions which includes the answers to the 25 most common questions.

01 How do I qualify for the FIFA 19 Weekend League?
02 I’m in division FUT Rivals 1. Am I qualified?
03 Is it true that silver 2 is now not enough to qualify?
04 Can I qualify even if I am in Division 10?
05 Can I use the token anytime I want?
06 How many tokens can I store?
07 How many games I have to play in each Weekend League?
08 Why I can’t find the DKTs?
09 When do FUT Rivals can be played?
10 Should I play FUT Rivals or Weekend League?
11 Why the calendar only shows one more round?
12 Why I didn’t ranked?
13 What should I do if I didn’t receive my weekly rewards?
14 Can I open my rewards on the Companion and Web Apps?
15 Are the for Gold 1 and the Gold 3 rewards the same ones?
16 Where are my monthly rewards?
17 Do packs expire?
18 Do I lose the packs if I don’t claim them?
19 Are the cards untradeable?
20 Why I didn’t receive my FUT Rivals rewards alongside with the Weekend League rewards?
21 Why do I play always in the same stadium?
22 How to turn on the Trainer?
23 Why my opponent is wearing my unselected active kit?
24 How the matchmaking works in FUT Champions?
25 What has changed on the Champions Channel?

HOW DO I QUALIFY FOR THE FIFA 19 WEEKEND LEAGUE?

I’M IN FUT RIVALS DIVISION 1. DOES IT MEAN THAT I’M ALREADY QUALIFIED FOR THE UPCOMING WEEKEND?

No. To be qualified for the Weekend League, you need to sum 2,000 FUT Champions points, regardless the division you are.
Every game you play in FUT Rivals will take you one step closer to qualifying for the Weekend League using the FUT Champions Points. The number of these Points earned for each game is dependant on your performance and current Division. The better you play, the more points you earn. Each Division has a multiplier on your FUT Champions Points, so the higher the Division you are in, the faster you’ll rack up Points. Instead of the high pressure of Daily Knockout Tournaments, the new qualification system through Rivals will give more players a chance to compete. Plus, every game played in qualification also helps you earn rewards as part of the Division Rivals Weekly Competitions.

IS IT TRUE THAT SILVER 2 IS NOW NOT ENOUGH TO QUALIFY?

Yes, it is. From FUT 18 to FUT 19 the qualification rules have changed. Now, you need to win points to redeem a token. Starting at Silver 1 (11 wins or more), the rewards earned include the full amount of points required to join another Weekend League. Additionally, every tier below 11 wins also includes some FUT Champions Points that will get you closer to another attempt at qualifying for the Weekend League. The old rules are not valid anymore:
1 winning one of the daily knockouts available (four consecutive wins);
2 being promoted from division 2 to division 1 on FUT online Seasons;
3 holding on FUT online Seasons division 1;
4 winning the FUT online Seasons division 1 title;
5 reaching silver 2 or higher, in the previous weekend league.

CAN I QUALIFY EVEN IF I AM IN DIVISION 10?

Yes, it is possible. However, in a lower division you get less points for each win. In other words, you will need to play more to achieve the qualification for the Weekend League. For example: in division 10, you need to win 100 matches in a single week. It is important to notice that this isn’t absolutely true, since you win points every time you play, even if you don’t win the game, and you also win a few points at the end of your FUT Rivals week.

CAN I USE THE TOKEN ANYTIME I WANT

Yes, it doesn’t expire. You don’t need to play the following Weekend League if you don’t want it. You can use the token to play in any other time. Remember that you must redeem your FUT Champions Points up to 24 hours after the start of the Weekend League you want to participate in. If you don’t redeem them in time, you can hold onto them to use in a future Weekend League.

HOW MANY TOKENS CAN I STORE?

HOW MANY GAMES I HAVE TO PLAY IN EACH WEEKEND LEAGUE?

From the start of FUT Champions in FUT 19, you will have the option to play up to 30 games during each Weekend League on PlayStation 4, Xbox One, and PC. While reducing the number of games for Playstation 4 and Xbox One players in each Weekend League from 40 to 30, EA’ll maintain the same level of rewards every week per tier, ensuring that Weekend League continues to be the place where you can earn the best rewards in FUT. Increasing the maximum number of games from 25 to 30 for FUT Champions on PC will, for the first time, allow players to earn the same level of rewards for playing the Weekend League as console players.

WHY I CAN’T FIND THE DAILY KNOCKOUT TOURNAMENTS?

You won’t find. They were replaced by the FUT Division Rivals.

WHEN DO FUT RIVALS CAN BE PLAYED?

This game mode is available everyday. It can be played in weekends, when Weekend League is running.

WHICH MODE SHOULD I PLAY ON THE WEEKEND: FUT RIVALS OR WEEKEND LEAGUE?

THE IN-GAME CALENDAR SAYS THAT THERE IS ONLY ONE MORE ROUND. WHY?

FUT Champions was a big investment for Electronic Arts and there is no reason to end it. The FIFA 19 Weekend League takes place uninterruptedly between October 2018 and August 2019. The schedule is being published as the competition goes on, and for that reason sometimes it shows one more round and at other times it shows two or three rounds. You can check the complete calendar clicking here.

I PLAYED THE WEEKEND LEAGUE BUT I DIDN’T RANKED. WHY?

You need to complete at least five matches to rank. It doesn’t matter the results. If you play less than five matches, you will not receive any reward for that week. It’s like you haven’t played at all.

I ALREADY FINISHED THIS WEEKEND LEAGUE CAMPAIGN BUT I HAVEN’T RECEIVED MY REWARDS. WHAT SHOULD I DO?

Wait. The weekly rewards are not delivered as soon as you finish your matches. According to Electronic Arts, you will receive them before the start of the next Weekend League. Most likely, they will be delivered to you around 8am (UK time) of every Thursday. You can follow our calendar to know the exact time for each round.

I WOULD LIKE TO OPEN MY REWARDS BUT MY CONSOLE IS NOT AVAILABLE. DO I HAVE ANY OTHER OPTION?

Yes! Since FIFA 18, it has become possible to see and open your weekly and monthly rewards through the Web and Companion Apps.

Yes. Each level has its own rewards (you can see them clicking here). However, when FUT Champions was created, in FIFA 17, there was no difference on the monthly rewards. That’s probably why so many people still make this question. You can check the weekly rewards for the three platforms on our website.

WHERE ARE MY MONTHLY REWARDS?

IS THERE ANY RISK TO LOSE THE PACKS IF I DON’T OPEN WHEN I RECEIVE THEM?

No. The packs you receive as Weekend League rewards can be opened anytime. They don’t expire. If you want, you can save them to open when better cards are in packs, as is the case of the Team of the Year.

I WILL BE OUT WHEN EA RELEASES THE WEEKLY REWARDS. WILL I LOSE THE REWARDS?

No. You don’t have to claim your weekly rewards before the next round starts. They will be waiting for you as soon as you open FUT on your console next time.

ARE THE CARDS I RECEIVE AS REWARD UNTRADEABLE?

WHY I DIDN’T RECEIVE MY FUT RIVALS REWARDS ALONGSIDE WITH THE WEEKEND LEAGUE REWARDS?

I ALWAYS PLAY IN THE SAME STADIUM. IS THIS NORMAL?

Yes, since January 2018 that all matches started to take place in the FeWC Stadium, with the Time of Day always set to night and weather always set to clear.

HOW DO I TURN ON THE TRAINER DURING A WEEKEND LEAGUE MATCH?

That is not possible. That feature is not available in this game mode.

IN THE LOADING SCREEN, MY OPPONENTS ALWAYS WEAR MY UNSELECTED ACTIVE KIT. IS THIS A BUG?

No. In order to avoid you to recognize your opponent, EA doesn’t allow you to see which kit he is using.

HOW THE MATCHMAKING WORKS IN THE FUT CHAMPIONS?

The first important goal for FUT Champions is to ensure that every weekend is a clean slate for players to compete for wins and rewards. To do this, EA uses something called ‘form’ as a key driver of matchmaking in each Weekend League. Everyone starts each weekend fresh at zero form, moving up or down with each win or loss. In football terms, match form of W/L/W/W/W would result in a +3 form. Form can only drop as low as -10 and go up as high as +15. Players with similar form are then paired in matchmaking. The result is that players that are better than average in the Weekend League (which is already a very skilled group of players) will quickly boost their form. The higher their form gets, the more challenging the competition becomes. Only the best of the best can consistently beat players with high form and attain Elite and Top 100 status. The second key piece to matchmaking is location. Players are matched based on their location and proximity to EA’s dedicated game servers to ensure quality matches.

WHAT HAS CHANGED ON THE CHAMPIONS CHANNEL?

One of the major changes is the addition of controller inputs, which allows you to see buttons the top players are pressing in every scenario of play, including during instant replays. On top of button inputs, you also have the ability to skip between stoppages in play in a replay and jump ahead / backwards on the timeline, allowing you to have greater control over the replays you want to watch.