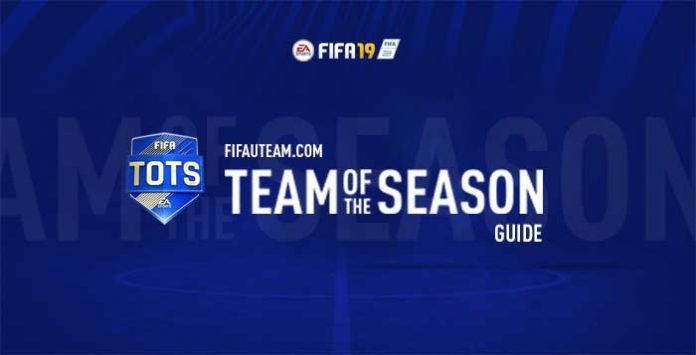 FIFA 19 Team of the Season is one of the most important moments of the game. In this guide, you will find everything you need to know about it, including the release date of each league, every single squad, the rules, the predictions and the answers to the most common questions.

FIFA 19 Team of the Season

What is the FIFA 19 Team of the Season Promotion?

Since FUT 12, that in every end of the season (European calendar), more exactly in May and June, Electronic Arts builds several squads based on the players real performances on that season. Unlike what happens with the TOTY, on the TOTS the players are chosen by their performances in the season and not in the full calendar year. Instead of releasing a single team, the Team of the Season is made by several squads, each one of a popular league or region.

Throughout the TOTS celebrations, various Squad Building Challenges (SBCs) and Weekly Objectives will be released with themed rewards such as packs, TOTS player items, and more. Details on FIFA 19 Team of the Season offers will be updated below.

When the FIFA 19 TOTS promotion will be released?

The TOTS event has been going since a few years ago. It is usually one of the last FIFA events of the season.

In the following table, you can see the TOTS event release dates of previous years:

TOTS event takes place once per year. During its release, it is possible to improve our teams and make amazing deals in the transfer market. That’s why it is normal to see the FIFA community eager and waiting for the launch of the first squad.

Year after year, EA follows a very strict calendar. Looking at the release dates of the previous years, it is possible to get a good idea about when the TOTS of FUT 19 will start. The experience tells us that we can predict the FIFA 19 Team of the Season release date based on two factors: international competitions and MC TOTS discussion. This isn’t a World Cup or Euro Cup year, so the end of major European leagues will be in line with what happened in 2017, when the first TOTS was released on May 12.

Like it happened in previous years, the Community TOTS will be the first one to be launched. Usually, EA Sports announce the nominees shortlist one week before the first squad goes out. Based on what we already explained, we predict that the first FIFA 19 Team of the Season squad will be released on May 10, 2019 (confirmed).

Starting May 10 with the Community TOTS, a new squad will be released every Friday to celebrate the best players from select leagues. Team of the Season event is available on PlayStation 4, Xbox One, Nintendo Switch and PC versions only until June 28, 2019.

According to the lineup of the last year, the estimated release dates for each squad are the following ones (more squads may be added but these are the main ones that are almost confirmed):

How the FIFA 19 TOTS Cards Work

Based on what happened last year, these are the official rules we expect to see this year:

RULE 1
AVAILABILITY
FIFA 19 TOTS cards from leagues become available in packs for a full week. During this period, they replace the corresponding regular not coloured cards. In other words, it is not possible to find a regular card of a TOTS player this week.

1.1. If you own the regular card of a TOTS player, your card will keep unchanged. If you want the new version, you will need to buy the corresponding version in the market or pull it from a pack.
1.2. Each one of the biggest league’s squads features an extra player that is only available via Squad Building Challenge.

RULE 2
RATINGS AND STATS
During the event, the best players of the season will be released in packs with upgraded ratings as unique items. The ratings and stats of these cards are permanent. They don’t change.

2.1. If a player has moved from one club to another one, he is a candidate for a TOTS card only in the club where he was in form.
2.2. Each player can only have one TOTS card, even if he was selected for more than one team of the season.

RULE 3
SQUADS
Each Team of the Season squad has 23 players that can be of any quality (see exceptions on 1.2.). Depending on which TOTS we are talking about, the players may be chosen by the community (Community TOTS) or by Electronic Arts (other ones). For the second time ever, the Community TOTS will be decided via fan vote. Besides that, there is only one squad which means that silver and bronze Most Consistent players will not be released.

The Community TOTS is based on a shortlist of 104 players who performed consistently well throughout the season but did not receive a performance-based in-form. This squad must follow the following requirements:

Let’s see who are the nominees:

FIFA 19 Team of the Season Predictions

Who has better chances to be included on the FIFA 19 Team of the Season?

If you want to have an idea about the players that you will be able to find in packs in their TOTS version, check our FIFA 19 Team of the Season predictions for each squad. 🌍 Rest of the World You can find the complete predictions for each squad clicking here.

Each one of the FIFA 19 TOTS squads 🌍 Rest of the World TOTS We estimate that the FIFA 19 Team of the Season offers will include:

Q: What is the Team of the Season?
A: Team of the Season, commonly abbreviated to TOTS, is a team of In Form players released on a yearly basis. These blue In Form cards are assigned to the best players based on their real performance on the season.

Q: Which one is better: TOTY or TOTS cards?
A: For the same player, TOTY card has better stats than the TOTS version. That’s why they are more expensive.

Q: Who picks the players for the Team of the Season?
A: EA Sports, except Community and Bundesliga squads which are chosen by the community.

Q: How many players are selected for each TOTS?
A: Each squad has 23 players (11 on the main team, 7 substitutes and 5 reserves). The biggest leagues may have an extra player available exclusively via SBC.

Q: Can a FIFA 19 Team of the Season player’s rating change?
A: TOTS card ratings remain unchanged after being implemented into FUT 19.

Q: Which players have the biggest boost?
A: Usually the ones with lowest rates.

Q: Are OTW, Headliners and RTTF cards upgraded when a new TOTS card is released?
A: No.

Q: Are TOTW released while the Team of the Season event is running?
A: Yes. Team of the Week are released interrupted every Wednesday.

Q: How can I know who are the players of FIFA 19 Team of the Season?
A: We will publish every final squad on this page.

Q: How long are FIFA 19 TOTS cards available in FIFA packs?
A: One week.

Q: How can I get one of these cards?
A: You can get a TOTS card in the same way you can get any other card: on packs or on the transfer market. If you want to try your luck on packs, you can go to the store and buy them with coins or FIFA Points. A few players are exclusively available via weekly objectives and SBCs.

Q: Will FIFA 19 TOTS cards be released all at once?
A: No. Each week, at least one new squad will be released.

Q: How the new ratings and attributes are calculated ?
A: It is EA Sports who decides and it depends on the player performance during the season and his IF/special cards.

Q: Can a player receive two TOTS cards if he has moved to another club?
A: No. He will receive a TOTS cards of the club where he played better.

Q: There will be promo packs during the TOTS season?
A: Yes, it will.

Q: In which FUT packs I can find FIFA 19 TOTS cards?
A: TOTS players can be found in any pack players cards. Obviously, the chances of finding one of these cards are higher if you open a pack which contains more player cards.

Q: Can I store packs to open during the TOTS week?
A: Yes. It doesn’t matter when you got the packs. The cards you will find inside depend exclusively on the date you open them.

Q: How many squads will be released?
A: There is one Team of the Season for each one of the most popular leagues.

Q: What is the a Community Team of the Season?
A: Community TOTS is based on a shortlist of 100+ players who performed consistently well throughout the season but did not receive a performance based in-form . The 23 winners are chosen by fan vote and will be revealed when the team is announced.

Q: What is the ROTW Team of the Season?
A: It is a squad made of a selection of the best players of the season from the whole world not included on others TOTS.

Q: Can a player be released in more than one TOTS?
A: Yes. All players from Ultimate TOTS are picked from the others Team of the Season. Besides that, a player released in Community TOTS can also be re-released in the respective league’s TOTS. When that happens, the new card has exactly the same overall, stats and position. It is like a relaunched.

Q: I have another question about the FIFA 19 Team of the Season.
A: First check if that question was not already answered in this guide. If it wasn’t, feel free to ask us in the comments.