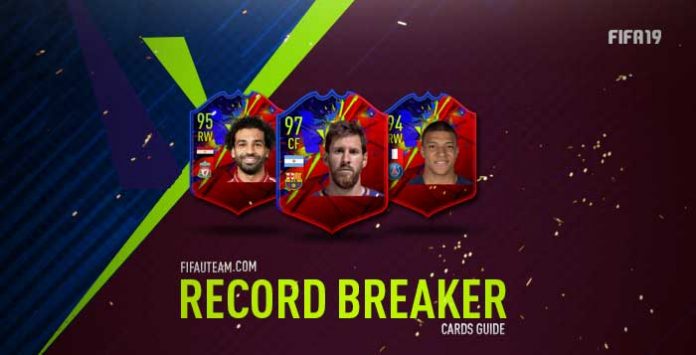 FIFA 19 Record Breaker cards are assigned for players who break records within real life football matches. Let’s learn something more about these red and blue coloured FUT 19 cards and check its complete list.

What is a Record Breaker?

The RB cards were initially created by Electronic Arts to celebrate something that was happening or for charity reasons. These cards didn’t fit in any of the other cards types. In FIFA 13 they changed the card name from ‘special’ to ‘record breaker’ and assigned it to players who break records within real life football matches. Most goals scores by a national team, most clean sheets, fastest hat-trick, most consecutive matches scoring goals or most header goals in a specific league are just a few examples.

The RB card replaces the corresponding regular card for a limited time. In other words, during the period that a player gets his FIFA 19 Record Breaker cards in FUT packs, it is impossible to find his regular card there. Your odds of pulling a RB card from a pack are exactly the same of pulling the regular card of that player in another time.

If you own the regular card of a Record Breaker, your card will keep unchanged. If you want the improved version, you will need to buy the corresponding special version in the market or pull it from a pack when they are available. When will the RB Cards be available?

FIFA 19 Record Breaker cards are extremely rare. It is not possible to estimate a release date because they will become available when a popular player breaks a new real life football record.

Usually, they are available in packs for only 24 hours or one week. That’s why it is so difficult to find them in packs or in the market.

You can have the regular card and the RB card of the same player in your club. However, you cannot use them both in your squad at the same time. Each player can only have a Record Breaker card.

Who got a RB card?

What happens to the RB cards’ prices?

As usual, FIFA 19 Record Breaker cards will be more expensive as soon as they are released. If the player is only available in FIFA packs for one day, it is possible that their price can begin to gradually rise over time, if they don’t receive a higher rated inform.

Like most inform cards, a FUT 19 Record Breaker’s value is strongly affected by the length of their availability in FUT packs. Their prices are extremely high in the first two days after its release, and becomes gradually lower until the end of the season.

What you need to know about FUT 19 RB Cards

Q: What is the a Record Breaker card?
A: Record Breaker, commonly abbreviated to RB, is a player who breaks records within real-life football matches.

Q: What is the difference between a Record Breaker and a Hero?
A: Record Breakers are associated with record-breaking achievements in the real-world of football while the Heroes make a heroic contribution during an important match.

Q: How long are FIFA 19 Record Breaker cards available in FIFA packs?
A: Most of the times, they are available for one week. However, sometimes they can be available for 24 hours.

Q: Who chooses the Record Breakers?
A: EA Sports.

How many FIFA 19 Record Breaker cards will be released?
A: It is impossible to predict because it depends on the records that are broken or not.

Q: Can a RB player’s rating change?
A: FIFA 19 Record Breaker cards ratings remain unchanged after being implemented into the game.

Q: Are certain stats upgraded to reflect a player’s RB performance?
A: Yes. If a player were to break a goalscoring record, you can expect an increase in shooting stats in particular on their FIFA 19 Record Breaker card.

Q: How can I get one of these cards?
A: You can get a RB card in the same way you can get any other card: on packs or on the transfer market. If you want to try your luck on packs, you can go to the store and buy them with coins or FIFA Points. The chances of pulling a RB card in a pack are low.

Q: How easy is to find FIFA 19 Record Breaker cards in FUT packs?
A: Your odds to find a specific RB card are the same of finding the respective regular card in another time.

Q: In which FUT packs I can find FIFA 19 Record Breaker cards?
A: RB players can be found in any pack players cards. Obviously, the chances of finding one of these cards are higher if you open a pack which contains more player cards.

Q: I have the regular card of a RB player. Why my card hasn’t changed?
A: Because the cards don’t change. You will need to buy the new card if you want the improved version of that player.