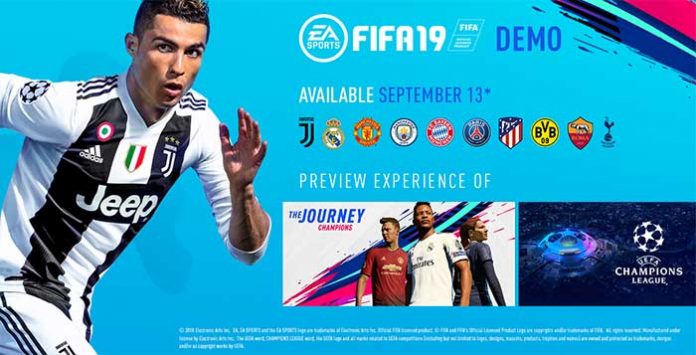 The demo guide for FIFA 20 can be found clicking here.

For which platforms the FIFA 19 demo will be released?

As usual, the demo should be released for the most popular plaforms:

When the demo will be released? Historically, the demo is released in the first two weeks of September. You can know the demo release date of the previous years here:

As you can see, the demo is always released two weeks before the official game’s release date. This year will not be an exception. We expect the FIFA 19 Demo released on September 13, 2018 (Thursday).

The exact FIFA 19 Demo release date depends of your region and your platform. Here it is the estimated schedule:

Note: The game should become available to be added to the stores at these times. However, it only will be available to you when your store updates.

Which game modes you will be able to play in the FIFA 19 Demo?

The FIFA 19 demo will be a limited version of the full game. It’s designed to show users what the full game will be like, showing off new features and gameplay improvements. Any progress will not carryover from the demo into the full game.

Besides a few screens that describes the new game’s features and that gives you the chance to buy the full game, the FIFA 19 Demo includes two game modes:

On Kick-Off mode, you can play a 4 minutes halves “Match Day” alone or against a friend. Take to the pitch with some of the best clubs in the world. There are ten teams available to play. It is possible to send the goals scored on the demo to EA Sports Football Club.

Here are the game settings of the kick-off mode:

Match Lenght
8 minutes (4 minutes each half)

Match Type
Single player or against a friend

Time of the Day
Day or Night

This is the year of the UEFA Champions League and EA don’t want to lose the chance to show it in the demo.

There’s no higher level in club football than the UEFA Champions League. Dreams are achieved and legends are made in this historic tournament that showcases the best clubs in the world. FIFA 19 is infused with the UEFA Champions League, thanks to official match presentation, a variety of tournament experiences that includes the Europa League and Super Cup, and an all-new commentary team in Derek Rae and Lee Dixon. The FIFA 19 Demo will include a limited version of The Journey III, also known as ‘Champions’. On The Journey mode, you can control Alex Hunter, inside and outside the pitch, on a journey to make his mark in one of the most popular clubs. It’s a cinematic world informed and influenced by real players, personalities, locations and events that take you places you’ve never been and bring you experiences only available in FIFA 19. The dramatic finale of Alex Hunter’s journey concludes in FIFA 19. Experience the story of the iconic football star on and off the pitch as he chases glory on the UEFA Champions League stage.

Obviously, this game mode has a few restrictions in the demo. Progress will not carry over to the full version of FIFA 19, but should be enough to help you decide if this game mode is for you or not.

Is your team included in the FIFA 19 Demo?

As we already said, there are ten teams on the FIFA 19 Demo. Let’s see who they are:

We will analyse now in more detail each one of these ten clubs:

How to Install the FIFA 19 Demo FIFA 19 Demo is only available for PC, XBox One and Playstation 4 gamers.

If you want to play it, you should click in one of the following links, download, install and you will be ready to go: