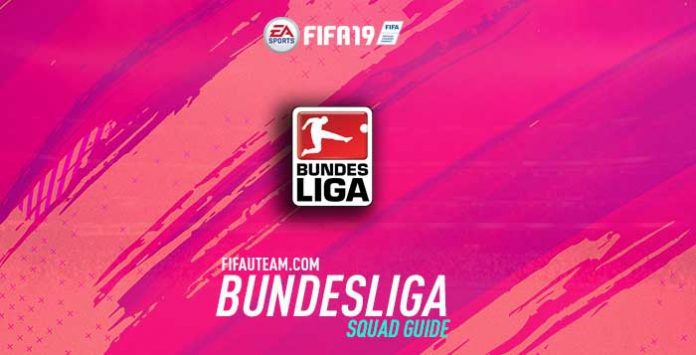 For all those players who plan to build a FIFA 19 Bundesliga squad, we’ve conducted an extensive analysis on the best players. Here is our guide to the top German league in FIFA 19 Ultimate Team.

All of these steps are necessary to have; or it could mean that the team is not always well built as it could be. This article aims to help those that want to form a FIFA 19 Bundesliga squad. Even the players that have a Bundesliga team, could take out some valuable conclusions from this guide that could help you make your team even better.

Remember that this year, we published separate Bundesliga guides for each position. You can visit them, clicking in the colourful links in the top of this page.

5 FLUCTUATION OF PRICES
In the chapter where FIFA 19 Bundesliga squads are suggested, we added a link where you can check anytime the updated prices.

The Bundesliga lives in the shadow of Premier League and La Liga but the truth is that it has many quality players.

The qualification of the champion is made through the made points system. Whichever team gathers the most points wins the league. The first four classified gain access to the champions league of the next year, while the fifth and sixth qualify to the Europa League and the last three trade places with the first two qualified of the 2. Bundesliga and with the play-off winner. Every season starts in August and finishes in May, having 34 game weeks with nine matches each, being a total of 306 matches per season.

The Bundesliga is the most watched sports league in the world and the third best league classified in the UEFA league coefficients.

Started in 1962, the Bundesliga has been conquered by twelve clubs. The dominant club is Bayern Munich, with a total of 28 titles. Borussia Dortmund (5), Borussia Mönchengladbach (5), Werder Bremen (4), Hamburger SV (3), VfB Stuttgart (3), FC Köln (2) and FC Kaiserslautern (2) were the other teams that won more than once.

Bundesliga is a good choice to who is looking for quality players, but doesn’t want to spend so much coins as happens in Premier League and La Liga based squads.

Ideas to help you building your FIFA 19 Bundesliga Squad

The team suggestions that follow are simple graphic indicators of the Bundesliga articles already published. They should serve merely as orientation because it’s impossible to build a team that fits everyone. They depend on various factors we don’t know such as budget, formation, custom tactics, style of play and player preferences. 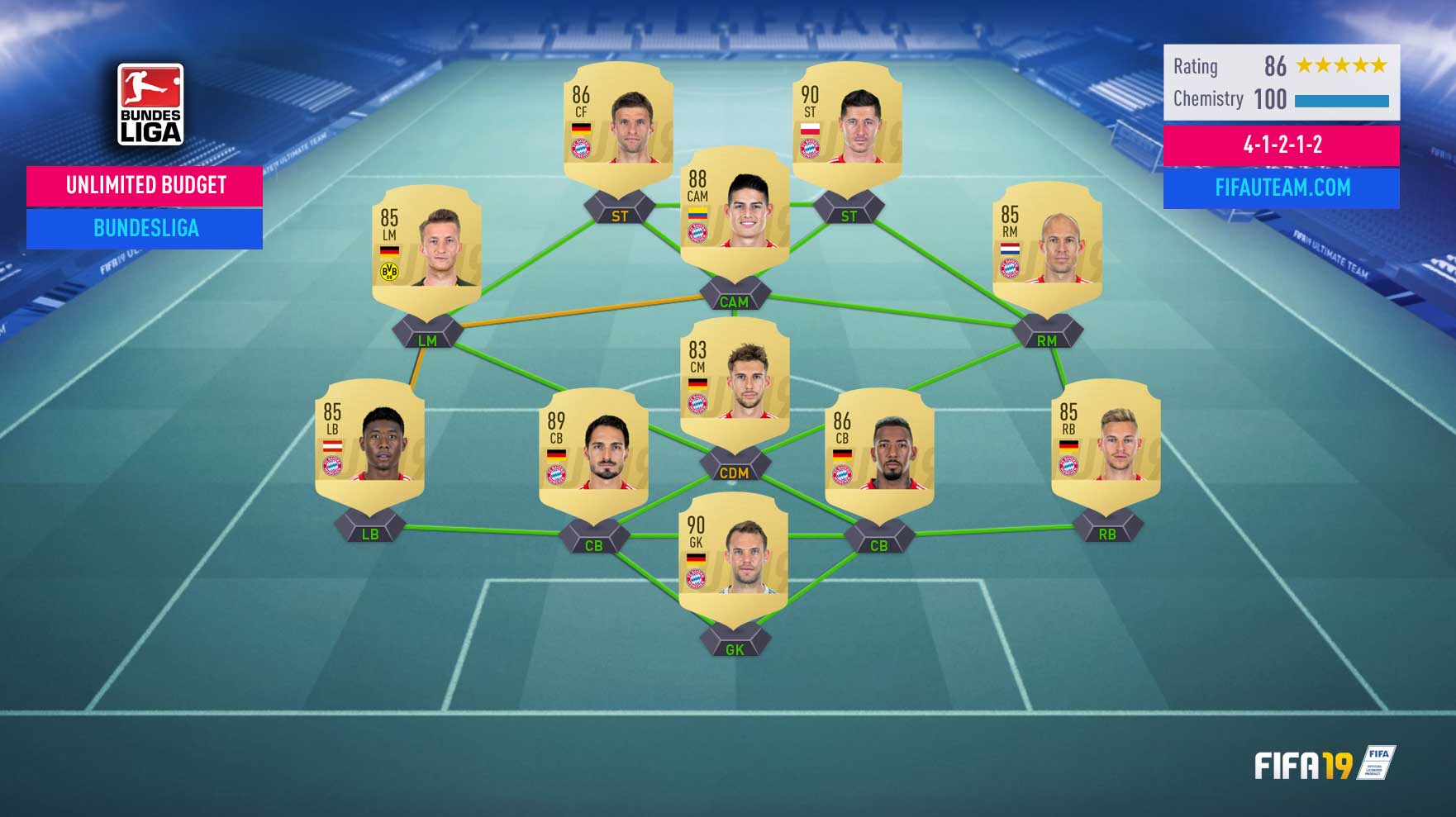 The choice for this team’s players was based on the guides published previously.

If there are undoubted players in this team, Neuer is certainly one of them. It is clear his superiority.

Boateng and Alaba are untouchables in any defence of any league. In our opinion, the other spots of the defence should be filled by Kimmich and Hummels. However, you may have a different opinion, especially if you like fast players. It isn’t the case. Both are slow but they are great with the ball on their feet – amazing passing and dribbling stats for someone playing in these positions.

This league has always a top quality player for each position, who is much better than all the other ones. The exception is the defensive midfielder, where Javi Martínez is not good enough. In fact, his main problem is pace. Our suggestion is to use a centre midfielder with defensive skills, like Witsel or Tolisso. We know that Goretzka is not perfect for this position but he has the minimum required attributes and using him as a CDM, leaves the CAM spot to James Rodriguez.

Who builds an unlimited budget Bundesliga squad usually chooses a formation with wingers, to take advantage of the high quality of Robben and Reus. Obviously, the same applied to Lewandowski in the attack. Depending on your play style, you can use Muller or Werner to the other spot. 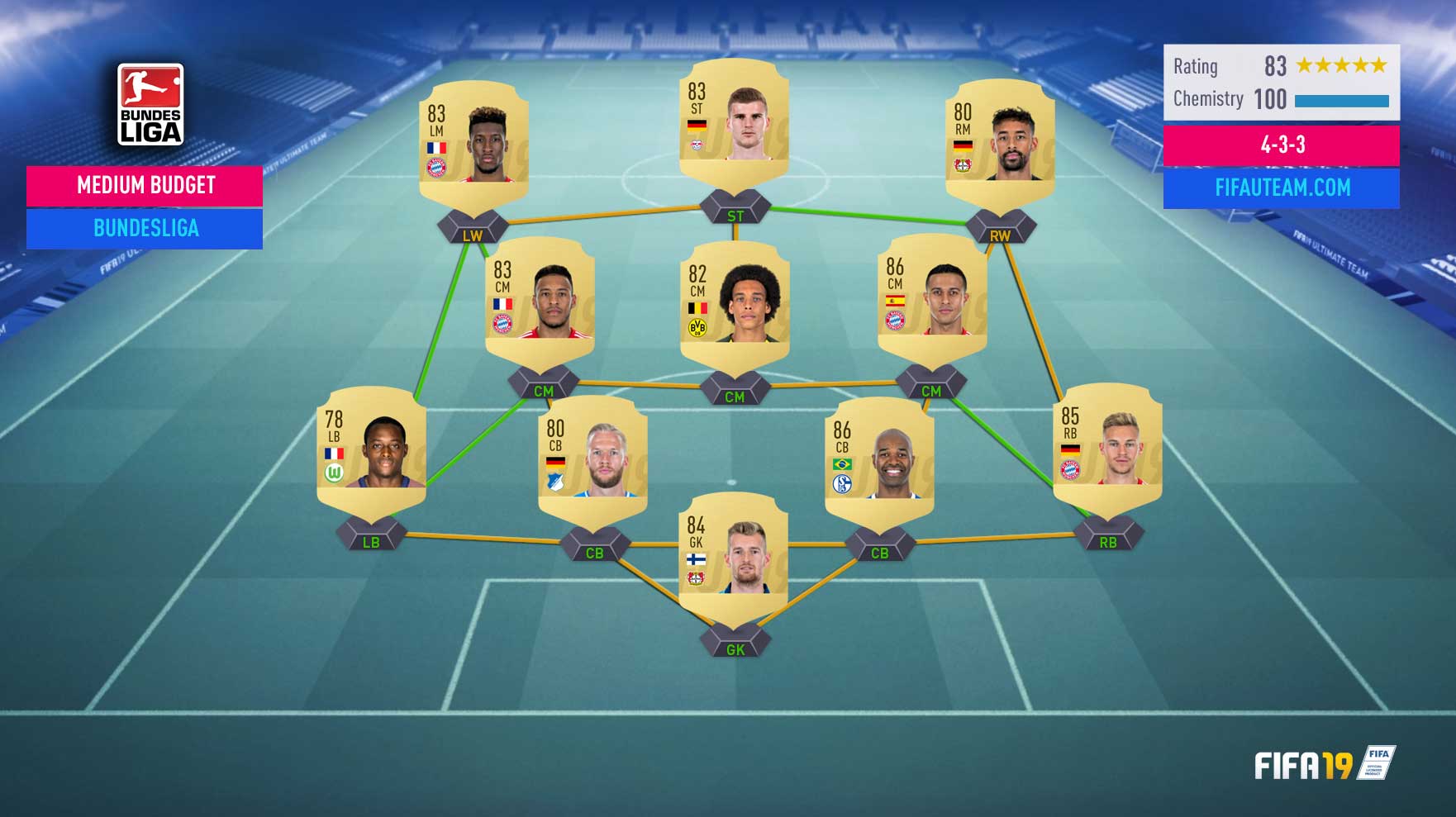 The choices for this team were based on the position guides we already have published.

Most of the cards of the previous team are too expensive to be used in the medium budget squad. In fact, only Kimmich is still in the starting eleven. Hrádecký, Naldo, Vogt and Roussillon are far from the same quality but they allow you to save many coins.

The central midfield position of this team has to be of Witsel. He builds up the first barrier between your goal line and the opponent, making his physicality attributes count. Tolisso and Thiago complete this interesting midfield.

In the ultrasonic attack, Bellarabi and Coman have the mission to assist Timo Werner. We believe he is the right choice for this formation, instead of using Muller, who is more expensive and not so good when alone in the attack.

If you still have some room in your budget, Robben and Goretzka are players that would improve this squad a lot. 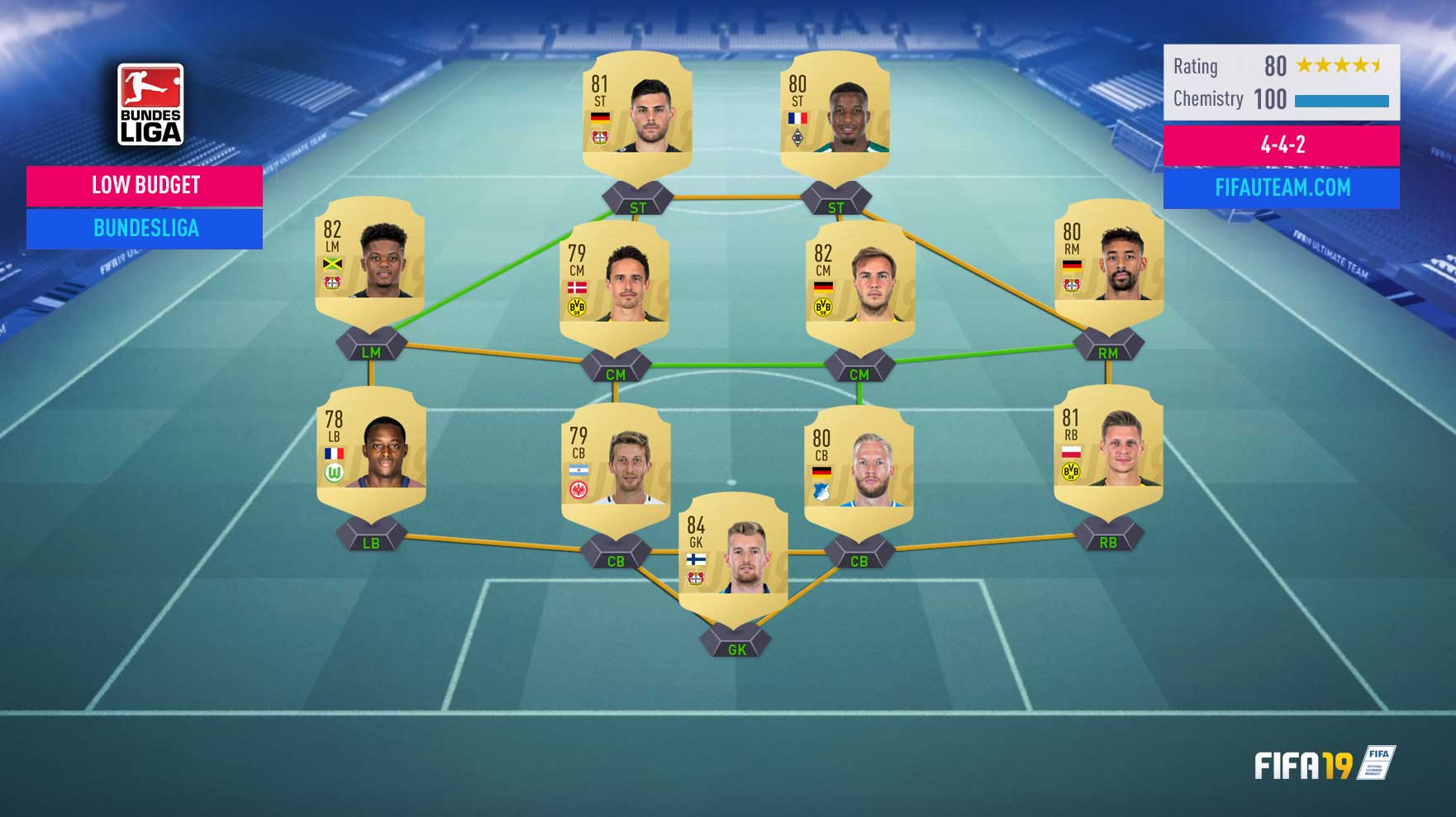 Once again: the choice for this budget team was based on the position guides published previously.

Lukáš Hrádecký and Piszczek are cheap enough to keep their sports in the team. Toprak and the twins Bender complete the defence.

In the midfield, Delaney and Götze complement each other well. The first one is strong, quick and aggressive, the second is a player that usually pushes forward to assist his colleagues. Bellarabi and Bailey fill the wings in order to assist Volland and Plèa.

Follow our tips and you’ll become more successful on FIFA 19 Ultimate Team with your Bundesliga Team.