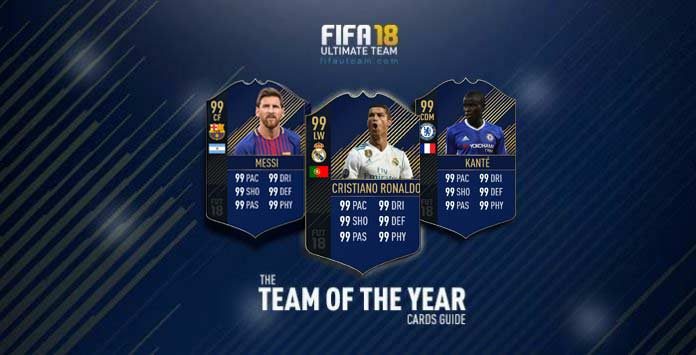 FIFA 18 TOTY cards are the most wanted players items. Let’s learn something more about these blue cards, including the release date, the stats boost and the prices.

Every single year since FUT 12, in early January, Electronic Arts build a team of players based on their real performance on the previous year. The players of this TOTY are usually selected from the voting of FIFPro, the worldwide professional footballers association, and announced in the FIFA Gala. However, this year this squad will be voted by creators, media and sports personalities. When FIFA 18 TOTY Cards will be available?

The Team of the Year is released once per year. This time, the event will be announced on January 8 and the cards will go out one week later.

These very special blue cards are assigned only to eleven players (a goalkeeper, four defenders, three midfielders and three forwards), that can be of any league and quality. It is only made a distinction between the four lines, not between each position. For example, instead of having full backs, this team can have four centre backs. Usually they are all gold and play in LaLiga Santander, Premier League and Bundesliga.

The players ratings and stats of FIFA 18 TOTY cards are usually boosted in six or seven points. The forwards evidently have less scope for an increase because Ronaldo and Messi are already highly rated. The attributes have a similar increase but it doesn’t mean that all attributes have to be improved. The position of the players in these cards may change if, in the previous year, they played really well in a new position.

These cards are usually the most expensive ones of the whole FUT 18.

We will describe what usually happens when TOTY comes out. Please, be aware that this is only valid for TOTYs released in January. This year, it may be different.

What you need to know about FIFA 18 TOTY Cards

Q: What is the difference between Team of the Year and Team of the Season?
A: TOTY is a team made by the players who played better during the calendar year. The TOTS has nothing to do with the calendar year. It is about the players of each league who have played better during the season (usually between August/September and May.

Q: Who chooses the players for the Team of the Year?
A: Creators, media and sports personalities along with EA.

Q: How many players are selected for the TOTY?
A: Eleven. The Team of the Year is released only once a year and contain the best 11 players in the world. The TOTY is made up of 1 goalkeeper, 4 defenders, 3 midfielders and 3 forwards, where each category can contain a player in any position.

Q: Will FIFA 18 TOTY cards be released all at once at any time?
A: Yes. It should happen after the release of the all new cards.

Q: In which FUT packs I can find FIFA 18 TOTY cards?
A: TOTY players can be found in any pack with rare gold players. Obviously, the chances of finding one of these cards are higher if you open a pack which contains more rare gold players cards.

Q: Can I store packs to open during the TOTY week?
A: Yes. It doesn’t matter when you got the packs. The cards you will find inside depend exclusively on the date you open them.

Q: When is the best time to open packs ?
A: That’s when all the Team of the Year players are in packs, probably between Saturday night and Monday night. With eleven TOTY players in packs, your chances of finding one of these cards are two times higher than in any other day.

Q: Are FIFA 18 TOTY cards available in FUT Draft mode?
A: Yes, they are available in all modes, including FUT Draft, Squad Battles and FUT Champions.