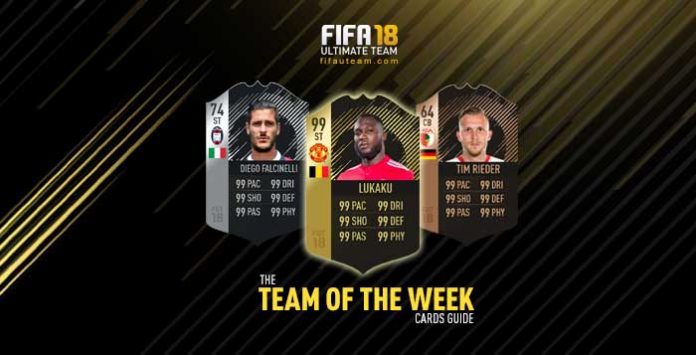 FIFA 18 TOTW cards are the most common In Form cards of FIFA 18 Ultimate Team. Let’s learn something more about these cards.

Since FUT 10, every week EA Sports selects twenty three players of any category based on their good real performances on the previous week and joined them in a single team. That team is called Team of the Week and you can play against them in the ‘TOTW Challenge’. Initially, the TOTW was formed by eighteen players but since October 14 2015, they are picking a starting eleven, seven substitutes and five reserves. However, when the domestic leagues are over, they usualy release squads featuring only 18 players.

FIFA 18 TOTW cards are also very important for OTW cards owners. Each time a player gets a new TOTW card, his OTW, if exists, also gets upgraded. When FIFA 18 TOTW Cards will be available?

By being permanently in packs, the TOTW cards are the ones that make the best connection between real football and the game.

The ratings and attributes of TOTW cards are usually boosted in one or two points. The rating boost is always relative to the most recent TOTW card, or eventually other special cards like MOTM or Hero, no matter if the player moved to another club or if he was upgraded. The position of the players in these cards may change if, in the previous week, they played really well in a different position.

It is possible to a player to have more than one TOTW card, if they have been assigned in different weeks. These cards differ from each other only in the ratings and attributes (eventually in the position too). The more recent is the card, the higher is its rating.

It is possible to a player to get a TOTW card of another quality. The only thing that he needs is to have received a second TOTW card with the maximum rating of his regular card quality. For example: if a player is rated 71 and his TOTW is a 74, the second TOTW card will be gold instead of silver.

What happens to the TOTW cards’ prices?

There are not many TOTW cards being auctioned in the first hours after their release but there are many people interested in them. Basically the person who pulled them can define unrealistic prices and still manage to sell them because whoever wishes to have that card will be forced to pay the stipulated price. After a few hours, new IF owners appear and define more realistic prices, forcing the others to do the same. The price keeps on falling on the following days, more gently than what happens on the first day of course, as a result of there being more similar cards on the market. Between the fifth and sixth day the market finds itself saturated and they hit their minimum price. However, on the seventh day IF cards no longer come from packs and the market notices that. The cards that were previously cheaper will no longer be available except in smaller amounts each time. Players realise that and the cards’ prices go back to increasing.

The TOTW prices tendency after the seventh day is as important as or even more than what could be noticed during the week. It varies according to the importance of the cards. The cheapest ones normally tend to follow devaluation, stabilising near their quick sell value. The ones that keep on being great alternatives for a squad become even rarer and for that they’re more expensive. General rule, prices keep increasing until the end of the game.

What you need to know about FIFA 18 TOTW Cards

Q: How many players are selected for each TOTW? 18 or 23?
A: Each TOTW has 23 players. However, when there are lack of quality players in activity, like during the Summer, Electronic Arts may select only 18 players.

Q: What time is Team of the Week released each Wednesday?
A: Each squad is released into FIFA 18 packs at 6pm (UK time).

Q: How long are FIFA 18 TOTW cards available in FIFA packs?
A: These cards are available in packs for exactly one week. After this, they are replaced by their regular cards in packs again, and are still available via the FUT transfer market.