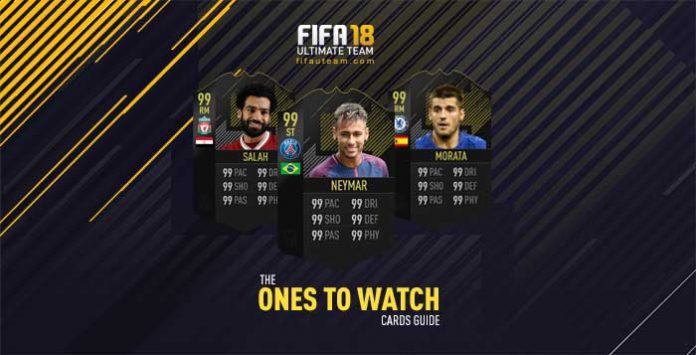 FIFA 18 Ones to watch cards were a great addition to the game. They replace the regular player cards in specific times and boost in rating and stats every time a player gets a new TOTW, MOTM, ETOT, Hero or Record Breaker card. Let’s learn something more about these FUT hybrid cards.

FIFA 18 Ones to Watch Cards

What is a Hybrid card?

Ones to Watch cards were a brand new card category in FIFA 17 Ultimate Team. These black cards are assigned to a very limited selection of players announced on late September (Summer Edition) and early February (Winter Edition), replacing their regular cards in packs for a limited time.

Opposite to all other FUT cards, the OTW ratings and stats are not fixed. They increase or not depending on the player’s form. When FIFA 18 OTW Cards will be available?

The OTW cards features top-players with less than 30 years old who moved to new clubs on this summer or winter transfer window.

The Summer Edition of the FIFA 18 Ones to Watch cards will be available since the first day (September 29) for a few days. The Winter edition is released in early February. During this period, it is not possible to find the regular cards of this selection of players because the hybrid cards are replacing them.

The FIFA 18 Ones to Watch cards boost in rating and stats every time a player gets a new TOTW, MOTM, ETOT, Hero or Record Breaker card. Their ratings just can go up. They can’t go down. In other words, they are in form cards that have the stats of that players highest rated cards. The ratings of OTW cards should be automatically updated as soon as one of these new card gets released.

The hybrid cards prices depend on how well the players performed and how many IF cards they get. That’s why it is so difficult to predict the prices. These cards give the game a fantasy football element.

With the hybrid cards in the game, players have now to make many important choices: do you buy a hybrid card right off the bat, knowing it will cost more than a regular card of an equivalent player? What if a player doesn’t get the TOTW card you were expecting? When do you sell? Do you cut your losses or do you hold onto the card hoping it will rise in value eventually?

Q: What are Ones to Watch cards?
A: Ones to Watch, commonly abbreviated to OTW, is a new In Form card category assigned to a very limited selection of players, replacing their regular cards on specific times.

Q: Can a hybrid player’s rating change?
A: Yes. His card boost in rating and stats every time he gets a new TOTW, MOTM, ETOT, Hero or Record Breaker card.

Q: Are stats in hybrid cards also updated?
A: Yes. The hybrid cards are like duplicates of the best rated TOTW, MOTM, ETOT, Hero or Record Breaker card.

Q: How long FIFA 18 Ones to Watch cards are released in FIFA packs?
A: Seven to Ten days.

Q: How long do Ones To Watch items continue to receive a stats boost?
A: If you have a Ones to Watch item in your club, its ratings will automatically match that of the players latest Team of the Week In-Form until the end of that player’s domestic league season. At this point, the player’s Ones To Watch Item type will continue to carry the last in-form rating he received through FUT 18.

Q: Can an hybrid card be downgraded?
A: No.

Q: In which FUT packs I can find FIFA 18 Ones to Watch cards?
A: They can be found in any pack with players cards. Obviously, the chances of finding one of these cards are higher if you open a pack which contains more player cards.

Q: It is possible to get a OTW card when opening a free pack like the ones from Objectives?
A: Yes, it is.

Q: What happens if a Ones To Watch Player is transferred/loaned to a different club?
A: The Ones To Watch Player Item type attributes and latest in-form rating will be unaffected. However, his OTW player item type will remain at the players previous club until he gets a in-form at which point the player’s club, crest and dynamic image will be updated.