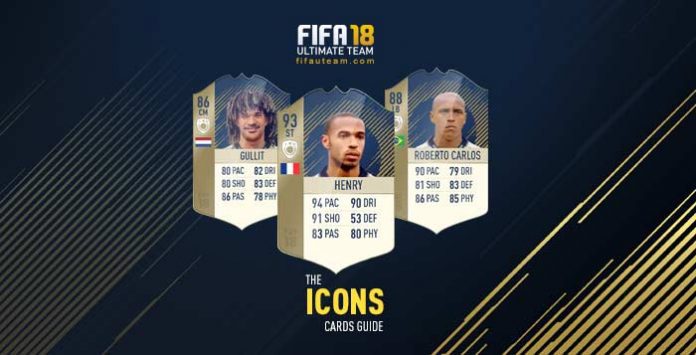 Icons are the new name for the old FIFA Legends. The FIFA 18 ICONS Cards feature some retired greatest football players of all time. Let’s learn something more about these special FUT 18 cards, now also available for Playstation 4 and PC.

What are FIFA 18 ICONS Cards?

Legends were included in FUT 14. However, this year, they were replaced by the FIFA 18 ICONS cards. The players of these cards are some retired greatest football players of all time.

The selection of the greatest legends of football has always been a controversial issue in the community. EA does not always choose the best players but this is justified by the necessity of licenses for each player, since they are no longer represented by any club. As the EA budget is limited, they do not always achieve the image usage rights of the true football legends.

The chemistry of the ICONS are slightly different from other players. They link well with other ICONS and team mates / managers with the same nationality. In FIFA 18, it is much easier to build squads with ICONS because since FIFA 16 they link well with today’s players. You only need to pair Nationality between a player and a Legend to create the strong green link on the pitch. 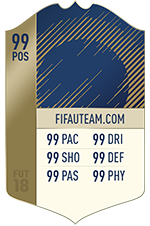 When FIFA 18 ICONS Cards will be available?

The 40 FIFA 18 ICONS are all available in the game since Day 1. Their cards are inserted into FUT 18 packs but you can also find them in the transfer market.

ICONS Stories offers you the chance to play with up 3 cards of each ICON. Iconic players of the past now have unique items with ratings that reflect how their style and attributes evolved throughout their illustrious careers. Every ICON will have 3 unique versions, each representing a period in their career. Two will be in packs from launch, third will be available at a specific time during the season. The Prime ICON version represent players when they were at their best & will be available on FUT 18 through SBCs and limited time packs.

These cards work in a very similar way of regular cards but they replicate the attributes based on players’ skills and flair during their careers. The ratings range between 86 and 95.

As the game progresses, users can change many of the card features such as the preferred position and preferred chemistry style. However it is not possible to improve the rating or the stats in a permanent way. If you want the best card of an ICON player, you should try to buy or win his Prime version.

What you need to know about FIFA 18 ICONS Cards

Q: Who chooses the ICONS?
A: EA Sports.

Q: When FIFA 18 ICONS cards are released?
A: These cards are available in packs since the first day, except the Prime versions (most rated).

Q: How easy is to find an ICON in FUT packs?
A: Just like it happens with the other best rated players, the likelihood of finding FIFA 18 ICONS in FUT packs is very low because these cards are extremely rare.

Q: In which FUT packs I can find FIFA 18 ICONS cards?
A: ICONS can be found in any pack with rare gold players. Obviously, the chances of finding an ICON are higher if you open a pack which contains more rare gold players cards.