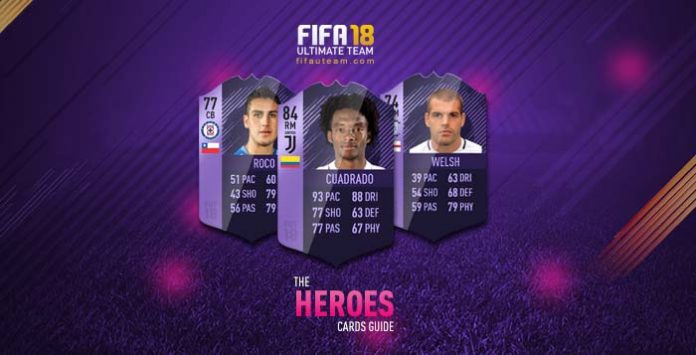 FIFA 18 Hero purple cards are awarded in FUT 18 for particularly significant achievements, including playing a key role in a club’s success. Let’s learn something more about FUT Heroes In Form Players cards.

What is a FUT Hero?

The Heroes were created in FIFA 15 Ultimate Team to reward individual honours, like best players and best young players awards, and heroic contribution during an important match such as a league derby, winning promotion to a higher league, or saving his club from relegation.

Just like MOTM cards, these ones become available in packs for 24 hours or one week. During this period, the FIFA 18 Hero cards replace the corresponding regular cards. In other words, in the day a player gets his purple card in packs, it is impossible to find his regular card there. Your odds of pulling a purple card from a pack are exactly the same of pulling the regular card of that player in another day.

If you own the regular card of a player elected Hero, your card will keep unchanged. If you want the improved version, you will need to buy the corresponding Hero version in the market or pull it from a pack while available. When the FUT Heroes will be available?

The FIFA 18 Hero cards don’t have any periodicity. It is expected to see them between May and June, because it is when the domestic leagues end. However, a few heroes cards will be released before that, like the ones from the World Cup qualifiers. Usually, they are released along with the TOTW but in specific occasions, they can be out for 24 hours only.

You can have the regular card and the FUT Heroes card of the same player in your club. However, you cannot use them both in your squad at the same time.

The ratings and attributes of the FIFA 18 Hero cards are usually boosted in one or two points, compared with their last TOTW or special card or, if they don’t exist, their regular cards. The attributes have a similar increase but it doesn’t mean that all attributes have to be improved.

It is possible to a player to have more than one Hero card, if they have been assigned in different games. These cards differ from each other only in the ratings and attributes (eventually in the position too). The more recent is the card, the higher is its rating.

What happens to the Hero cards’ prices?

The overall rating, popularity, and position of a particular player is a key to determining their value, but players available for a period of 24 hours will be worth more FIFA coins than those who are available for a week. If a purple Hero were to receive a later inform, their previous purple card would likely drop in price significantly.

Colour | Purple
How many Cards in FUT 18 | 1 to 40
How long they are in packs | Usually one week or 24 hours
When they are released in packs | Anytime
How big is the boost | Usually one or two points compared to the regular card or last TOTW/Special card (except RB, TOTY and TOTS)
Date of the first card in FIFA 18 | October
First Card in FUT History | Released for the first time in FIFA 15

What you need to know about FUT 18 Hero Purple Cards

Q: What is a Hero card?
A: Heroes cards reward individual honours, like best players and best young players awards, and heroic contribution during an important match such as a league derby, winning promotion to a higher league, or saving his club from relegation.

Q: When FIFA 18 Hero cards are released?
A: These cards are usually added to packs at midnight or along with the TOTW.

Q: How long are FIFA 18 Hero cards available in FIFA packs?
A: Most of the times, they are available for a week. However, they can also be limited to 24 hours.

Q: Who chooses the FUT Heroes?
A: EA Sports.

Q: Can a Hero player’s rating change?
A: FIFA 18 Hero cards ratings remain unchanged after being implemented into the game. However, Winter Upgrades can force them higher.

Q: Are certain stats upgraded to reflect a player’s Hero performance?
A: Yes. For example: if a player scores seven goals in a single match, you can expect an increase in shooting stats in particular on his FIFA 18 Hero card.

Q: How can I get one of these cards?
A: You can get a Hero card in the same way you can get any other card: on packs or on the transfer market. If you want to try your luck on packs, you can go to the store and buy them with coins or FIFA Points.

Q: How easy is to find FIFA 18 Heroes cards in FUT packs?
A: Your odds to find a specific Hero card are the same of finding the respective regular card in another time.

Q: In which FUT packs I can find FIFA 18 Hero cards?
A: Heroes can be found in any pack with players cards. Obviously, the chances of finding one of these cards are higher if you open a pack which contains more player cards.

Q: I have the regular card of a Hero player. Why my card hasn’t changed?
A: Because the cards don’t change. You will need to buy the new card if you want the improved version of that player.

Q: Are FIFA 18 Heroes cards available in the FUT Draft mode?
A: Yes, they are available in all modes, including FUT Draft and FUT Squad Building Challenges.