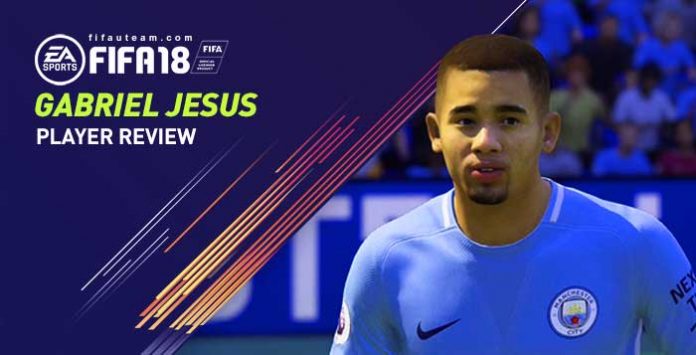 What do you think about a FIFA 18 Gabriel Jesus Player Review? drpoplove have made one especially for you.

Don’t forget to support him, subscribing his Youtube channel, following him on Twitter or becoming a patron.

How good is Gabriel Jesus and how to play with him

Hey comrades, welcome back to my FIFA 18 academy! Today we’re mixing things up a little, so instead of examining a gameplay mechanic, we’re taking an in depth look at one of the most overused players and finding the best way to play with him.

My Experience With Jesus

I’ve used him a striker, both as central and on either side. I’ve tried all of the available player instructions, except for target man since he’d be awful that. On paper, Jesus is a machine for an 81 rated card. He’s fast, agile, composed, has good ball control/dribbling, great stamina, and decent finishing. Plus he’s got 4 star skills and a 4 star weak foot.

However, he’s super small and weak, and his passing, shot power and long shots are poor. His positives outweigh the negatives, but the negatives combine in such an awkward way that take some getting used to.

Jesus has H/H work rates, which hurt and help depending on your playstyle. Let’s dig deeper!

Jesus Is A Solid Scorer, But His Timing Is Very Specific

Due to his decent finishing but crummy shot power, you might find yourself underpowering or overpowering his shots often. As a result, Jesus can feel inconsistent at times.

You might score a world class goal in one attack, but in the next you might miss from 8 yards. The timing window for how much power to add and how drastically to aim is too specific if you’re looking for a player that you don’t really have to think about.

Furthermore, his inability to bang in long shots limits how you can play him. Defenders will know that they don’t have to fear Jesus too much when he’s far from the box. And due to his timing being so specific, finesse shots that aren’t driven tend to be too precise to pull off.

Jesus relies heavily on having a good line of sight to goal.

Jesus Is Fast And Versatile, But Not The Dribbler You Want Him To Be

Although you can send Jesus on blistering runs or quickly dart around the pitch with him, he still feels stiff on the ball. A guy like Messi has all sorts of animations that make it easy to beat defenders with close control or fast skill moves. A guy like Jesus has the “regular” animations which are nowhere near as effective. His skill moves are wildly inconsistent, despite his high attributes and 4 stars.

Sometimes they come out super fast. Sometimes they come out super slow. It very much depends on what the defender is doing. If the defender is rushing blindly, Jesus will skill his way out of trouble with ease. But if you’re being blindly rushed, you didn’t really need a skill move or super close ball control to begin with, right? Just good reaction time. The difference between Jesus and someone like Messi is that Messi can pull shit out of his ass no matter what the defender is doing, whereas Jesus’ animations require an optimal scenario for them. Also,Jesus is easy to bully off the ball inside the box. He doesn’t do well in crowds.

With that said, it’s undeniable that he has an excellent burst of pace, which is often more important for a striker than just sprint speed. Since his H/H work rates will often see him come a little deeper, his acceleration is fantastic because he’s able to shift roles quickly, from striker to creator. And that’s Jesus’ biggest strength, outside of turning water into wine.

Jesus Is A Jack Of All Trades, But A Master Of None

Keep in mind that although Jesus can switch between finisher and creator on the fly, he’s not amazing at either. He gets the job done but he won’t make you feel like an overpowered beast plowing his way through Amsterdam’s red light district.

His passing range is poor and limits him as a creator. You can make lots of little passing moves and triangles, but his medium length passing is questionable. And his long range passing blows.

Before swearing yourself to Jesus, ask yourself, “Do I need a very specialized player in my squad, or someone who’s decent at everything?”

Of course, you can always apply a specific chemistry card to him, but his stats are so all around that he still won’t feel “amazing” with any of the boosts.

My Score And Recommendations For Using Jesus In FIFA 18

✔️ Play Jesus as striker, whether alone or not.
✔️ Leave his instructions on default or change him to a False 9 that goes wide (good for link up play with CAMs/wingers).
✔️ Don’t put him on get in behind because his H/H work rates get in the way.
✔️ Pair him with a good passer, whether as a 2nd striker or someone behind him, in order to maximize the usefulness of Jesus’ pace.
✔️ Don’t ever rely on his long shots or physicality.
✔️ Work him into the box with short quick passing or fast through/driven balls.

I give Jesus 3 stars out of 5 (no half stars). It’s very useful to have an all around player like him if the rest of your team can cover for the fact that he’s not great at anything. He’ll always be a decent option in this game because of his versatility.

However, as of this writing (October 2017) he’s super expensive and goes for over 50k. That’s simply not worth it. He’ll be much cheaper in about a month.

Anyway comrades, that’s it for today, hope it’s been helpful! If you have any questions, comments, or ideas about Jesus, let me know in the comments below!