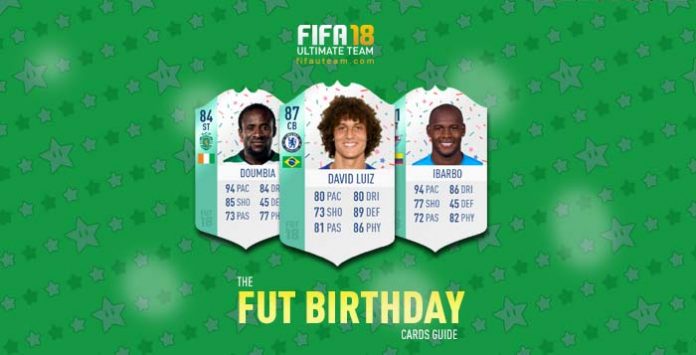 FIFA 18 FUT Birthday cards were created to celebrate the history of FUT. Let’s learn something more about these player’s cards.

What is the FUT Birthday?

FUT Birthday Anniversary Celebration was created to celebrate the success of the FIFA Ultimate Team game mode and it currently is one of the best FIFA promotions. This event is released every year in late March and lasts for about a week. During the FUT Birthday Anniversary, 23 unique players items are released.

These cards were a brand new themed card created to celebrate the Ultimate Team anniversary. Featuring 23 current players who were fan favorites in previous versions, each FUT Birthday Squad member has upgraded ratings reminiscent of their past FUT item. They usuall become available in packs for only seven days. During this period, the FIFA 18 FUT Birthday cards replace the corresponding regular cards. In other words, in the day a player gets his FUT Birthday cards in packs, it is impossible to find his regular card there. Your odds of pulling ones of these cards from a pack are exactly the same of pulling the regular card of that player in another day.

If you own the regular card of a player elected to this squad, your card will be kept unchanged. If you want the improved version, you will need to buy the corresponding FUT Birthday version in the market or pull it from a pack in that day. When FIFA 18 FUT Birthday Cards will be available?

The FIFA 18 FUT Birthday cards will be released during the FUT anniversary event. In FUT 18, the estimated date for the release of these special cards is March 16, 2018 (Friday).

The ratings and attributes of FUT Birthday cards are boosted according to the top form of the players chosen for this squad. These cards work in a very similar way of regular cards but they replicate the attributes based on players’ skills and flair during the peak of their careers. Q: Who chooses the players for this squad?
A: Electronic Arts, based on the past community preferences.

Q: How can I get one of these cards?
A: You can get a FUT Birthday card in the same way you can get any other card: on packs or on the transfer market. If you want to try your luck on packs, you can go to the store and buy them with coins or FIFA Points.

Q: In which FUT packs I can find FIFA 18 FUT Birthday cards?
A: They can be found in any pack with players cards. Obviously, the chances of finding one of these cards are higher if you open a pack which contains more player cards.

Q: It is possible to get a FUT Birthday card when opening a free pack like the ones from FUT Champions rewards?
A: Yes, it is.

Q: I have the regular card of a FUT Birthday player. Why my card hasn’t changed?
A: Because the cards don’t change. You will need to buy the new card if you want the improved version of that player.