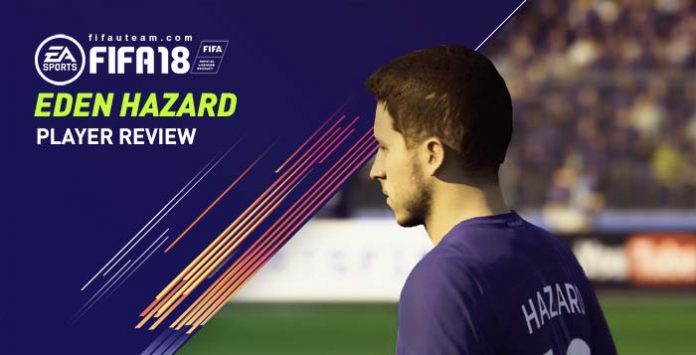 What do you think about a FIFA 18 Eden Hazard Player Review? drpoplove have made one especially for you.

Don’t forget to support him, subscribing his Youtube channel, following him on Twitter or becoming a patron.

How good is Eden Hazard and how to play with him

Comrades, hello and welcome back to my FIFA 18 Academy! It’s time for another player review.

Expectation Based on Attributes

Naturally, he is a tiny motherfucker with no strength, and his shooting power is pretty damn weak.

Based on the attributes alone, Hazard should be a slightly worse Messi. But as is often the case in FIFA, the mixture of a player’s attributes can create something unexpected or strange.

So is Eden truly an elite in game player? Let’s find out!

My Experience With Eden Hazard

I played Mr. Hazard as an LF and ST (usually during 2nd halves to mix it up) in a 4 3 2 1. He had the Hawk chemistry style on him and was designated as my primary goalscorer with no player instructions.

I had purchased him with the expectation that he would win me matches almost on his own. He played with Jesus and Deadeye Willian up top, and sometimes Prime Icon Del Piero. Behind him was the trio of Vidal, Bakayoko, and Nainggolan.

In the end, I scored 72 goals in 52 matches with 15 assists. To be honest, even I’m impressed with that return, but I can’t stress enough that he was my primary scorer. As a result, we should expect his stats to be outrageously good.

Hazard Has Almost OP Finesse Shots And No Fear Factor

The vast majority of Hazard’s goals came from the edge of the box and long range finesse shots from tight angles. Although he requires a lot of power to be pumped into them, Hazard’s finesse shots are fantastic once you get used to them.

The best thing about Hazad is that he’s often overlooked in game. If you got a Ronaldo or Messi, those fuckers are being closed down immediately, and you’ll need to work hard with them to generate chances.

With Hazard, you usually get a lot more space, which means you can quickly change direction on the edge of the box and bang a finesse shot in. His finesse trait is so clutch and is often overlooked by enemy defenders, so you’ll end up surprised at how many of them you can score. Even against great keepers like David De Gea.

When/if Hazard gets an in form card that boosts his shooting attributes a bit, his finesse shots will definitely be overpowered as hell, just like Jonas in FIFA 17.

By the way, Hazard’s regular shots are excellent as well. Keep in mind I had Hawk chemistry on him though.

Hazard Has The Body Of A Punk Ass 12 Year Old

Eden Hazard is soooooooooooo weak in game. He doesn’t fall down easily thanks to his balance, but he’s going to lose a physical battle 95% of the time. That’s a pretty key thing to understand, especially when a guy like Ronaldo performs like a tank in game and can outmuscle CDMs for some reason.

With Hazard, your priority should be to take a step away from the defender if they’re near you. Don’t invite physical contact. They’re the cat and you’re the mouse. If you’re at the LF position and can take a diagonal step towards the bottom right, do it, and then blast a wicked sick finesse shot at the far post.

The Basics Of Dribbling Were Not Taught To Hazard

Despite his solid attributes, Hazard is not an outstanding dribbler. I guess EA didn’t give him the animations that guys like Messi and Neymar have.

When you do close control with Hazard, he does this weird thing where he primarily uses 1 leg whilst showing the ball to the opposition. Perhaps you can get used to it over time, but I certainly didn’t. If you pay hundreds of thousands of coins for a 90 rated player, your expectation shouldn’t be to have a long ass gelling period. It’s not that Hazard’s dribbling is terrible, it’s just that it’s not as good as you hope it would be from his attributes.

I will say that Hazard’s skill moves come out just fine. It’s nothing special but they’re not slow or anything like that.

Apart from what I mentioned really don’t understand why Hazard doesn’t feel like a god tier dribbler. He has amazing attributes and 4 star kills, but not the animations. So he kind of feels like a souped up David Villa instead of a cheaper Messi.

My Score And Recommendations For Eden Hazard

I give Hazard a good ol’ 4 out of 5 stars. Assuming his next special card improves his shooting, he would automatically get 5 stars. However, keep in mind that you’re not buying a skiller here, you’re buying a goal scorer. So you own personal score might be different.

If you do get Hazard, here are my recommendations:

✔️ Play him on Hawk due to his awful shot power and try to cut inside like Robben.
✔️ Don’t try to skill through defenses and don’t invite challenges.
✔️ Surround him with good passers so that they can do driven balls to him, which he can trap and then immediately go for the kill.
✔️ Try to step away from defenders near the edge of the box and immediately unleash finesse shots across the goal, even with tight angles.
✔️ Switch Hazard to ST if the enemy keeps shutting you down on the wings.

I hope this has been helpful comrades! If you have any questions or thoughts about Hazard, let me know in the comments below.