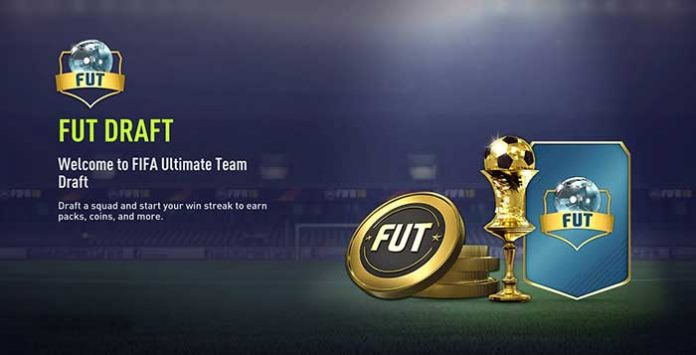 FIFA 18 Draft is a game mode within FUT that allows you to test your game skills and also your team building skills Follow our guide to know who it works.

How FUT Draft for FIFA 18 works?

Get into FIFA Ultimate Team (FUT) Draft Mode and test your team building skills. To enter Draft mode, you need a draft token. Then you can pick the best fit for each position from a five-player draw. Draft your squad and challenge your opponents in a series of up-to-four matches. You can win big rewards for your club.

Here is how it works:

2 Choose one of five different formations.
The formation you pick will be your default formation throughout the series of matches.

3 Pick your Captain from a set of five superstars.

4 Fill out the rest of your 23-person squad by picking players for each position from a random draw of five players.
Once you choose your starting XI, Bench, and Reserves, you can move players around to improve your Chemistry rating.

Take your squad to the pitch and challenge your opponents in a four-match series. Compete in single player or online against opponents across the world.
You’ll earn better rewards as you progress. Earn the best rewards by winning four matches in a row. Be sure to have a good connection because you’ll lose your progress if you get disconnected.

The most common questions about the FIFA 18 Draft

Q: What is FIFA 18 Draft?
A: FIFA 18 Draft is a game mode within FUT 18. Playing it, you can test your team building skills as you pick the best fit for each position from a five-player draw. Draft a squad and challenge opponents in a series of up to four matches to win big rewards for your club.

Q: When FIFA 18 Ultimate Team Draft will be available?
A: Since the first day: September 21.

Q: Who are my opponents in FIFA 18 Draft?
A: You will play against other FUT Draft teams.

Q: Is it possible to play FIFA 18 Draft online ?
A: Yes. This mode is available for single player and online.

Q: How do I enter in Draft mode?
A: Easy. Inside your FUT mode, go to ‘online’ or ‘single player’, and then select ‘draft’.

Q: How do I start playing FIFA 18 Draft?
A: To start playing Draft mode you first need to choose your formation, pick a captain, build your team and select a manager.

Q: Can I choose any formation?
A: No. Just like it happens with the players, there is a random selection of five formations to pick. Start your FUT Draft by choosing the one you like most. Choose wisely: the formation you pick will remain as your default formation throughout the series of matches.

Q: Why do I have to pick a captain?
A: The captain is the first player you need to choose to your FUT 18 Draft squad. Usually, he is the best player on your team. The five-player draw you will have to pick to the other positions are based on this choice.

Q: How do I build the rest of my squad?
A: From there, fill out the rest of your 23-man squad by picking players for each position from a random draw of five players. You’ll be faced with interesting team building challenges: do you grab the best highest rated player in that position or focus on maximizing team Chemistry? Try different combinations to see what works best for you. After selecting your starting XI, Bench, and Reserves you can then move players around to improve your Chemistry rating.

Q: Can I change or sell my players?
A: No. In fact, these players are not yours. There is no market in Draft mode. You pick your squad and you need to keep with them until you have a fresh start.

Q: It’s too boring to pick the 23 players from 100+ players the game shows to us. What can I do about it?
A: Just look at the bottom of your screen. There is a button to auto-complete your squad.

Q: The random draw of five players is exclusive to NIF players?
A: No. Any FUT player may show up in the draft, including ICONS, special and in-forms. With that kind of variety, the FUT Draft is a great opportunity for all gamers to try some of the best players in the game.

Q: Previous IFs can appear in FIFA 18 Draft?
A: Yes, not just during their current week. For example: TOTY players can show up after TOTY is over.

Q: Can I keep with the Draft players to use in tournaments and seasons?
A: No. You can use them only while you are winning and at most four matches. Then, you will have to pick a new squad to play FUT 18 Draft. Draft players can only be used in Draft mode. However, you can use the rewards you win in this mode to improve your original FUT squad.

Q: Why do I need to choose a manager?
A: Don’t forget that you are playing Ultimate Team mode. A Manager with the right nationality or league links will help to improve your team’s chemistry.

Q: There is a fee to play FUT Draft on FIFA 18?
A: Yes, there is. But it is not in real currency. Every time you play this mode you need to pay 15,000 coins or 300 FIFA Points. It may look a lot but it is not because, even when you lose the first match, you’ll still receive a reward equal to the entrance fee.

Q: What are the rewards?
A: Usually you get a pack that you can use in your original FUT squad. A full list of rewards can be checked here.

Q: How many matches I need to play to get a reward?
A: Once you’re ready, it’s time to take your squad to the pitch and challenge opponents to compete in a four-match series. You can compete in single player or online against opponents across the globe. As you progress, you’ll earn better rewards, including coins, packs, and more. Win four matches in a row to earn the best rewards possible. When you are defeated before the fourth match, you also get a reward but not as big. Each time you win, the potential rewards increase.

Q: What happens after I win four matches?
A: The same of when you are knocked out: you claim your prize and then start all over again, building a new squad and going on a new FUT 18 Draft four matches season.

Q: Why people love this mode?
A: Probably because they are free to try new players and new cards.