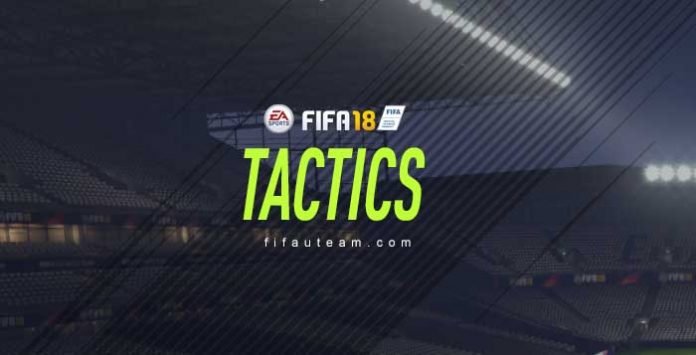 The FIFA 18 Custom Tactics are responsible to make your team play the way you want. If you don’t know what they are or how to set up them, read this guide where we explain everything you should know.

Custom Tactics Guide for FIFA 19 can be found clicking here

You created a squad with good players and a decent chemistry. You also picked your favourite formation but, even knowing you have good FIFA skills, you still don’t understand why you don’t win more often, right? Well, maybe something is missing. Most of the people ignore that, when they have their team almost ready, they need to make the final adjustments to make that team play the way they want. They need to give it their identity. If you feel that this may be happening to you, you still have to set up (in descending order of importance):

Today we will explain how the FIFA 18 Custom Tactics work and how they can be useful for your team.

The tactics allow you to adjust the way your team plays. They have a big impact on your play style. Unlike what happens with instructions, these orders will not affect only one player but the whole team. Do you know when you want your backline to go up the most possible and they insist to stay on the penalty area? Well, you can change the pressure slider to do that thanks to the tactics.

You can access the FIFA 18 custom tactics screen following the path Ultimate Team > Squads > Active Squad > Squad Actions > Custom Tactics. Before starting a match, you can also make changes, selecting Edit Lineup > Squad Actions > Custom Tactics. Even after the game starts, you can pause it and make new adjustments. The game will always save your last configuration which means that you don’t have to set up every time you are going to play. Your team will assume the standard or the latest configuration unless you apply a different tactic.

Before we explain the FIFA 18 Custom Tactics, we need to warn you that you should set up your instructions according to your play style and experience, as well your squad needs. There is no such thing as perfect configuration, so avoid copy it from other players. Just because it works with them, it doesn’t mean that it will work with you. Besides that, you should also realize that, when you make a decision, you are adding good things to your team but at the expense of something bad. For example, when you pick ‘aggressive interceptions’, your players will probably take the ball from your opponent more times but they will also to be booked with a yellow or red card more often. It’s up to you to decide whether or not it’s worth it.

FIFA 18 Custom Tactics – One by One

How to set up each tactic ℹ️ DESCRIPTION
It determines the speed at which the attacking team advances play in the first two thirds of the pitch. It ranges between 1 and 100.

⚫⚪⚪ 1-33 | Slow
The team is patient building play, often passing the ball around in defence with players regularly passing backwards. Players are more selective in their runs going forward and put the emphasis on finding good space over finding forward space.

⚪⚪⚫ 67-100 | Fast
The team looks to get the ball from back to front as quickly as possible. Players choose to position themselves in more advanced positions on the pitch. Players make more forward runs.

ℹ️ DESCRIPTION
It determines the general passing distance and the style of support play from teammates in the first two thirds of the pitch. This changes the emphasis on long or short passes both on and off the ball. It ranges between 1 and 100.

⚫⚪⚪ 1-33 | Short
The team will try to build using short passes. Players closest to the ball possessor will come to support.

⚪⚫⚪ 34-66 | Mixed
The team does not build using a particularly short or long passing game.

⚪⚪⚫ 67-100 | Long
The team will look to play the longer ball, perhaps targeting a tall striker or looking for the ball over the top. Players farther from the ball possessor will attempt to find space. Close players will anticipate the long ball and push up to look for the knock down or flick on.

ℹ️ DESCRIPTION
It determines the freedom that players have to make runs and support in positions that stray from their formation position in the first two thirds of the pitch.

⚫⚪ | Organised
Players tend not to stray too far from their assigned positions during the course of the match. The team maintains structure when building play.

⚪⚫ | Free Form
Players have the freedom to make runs out of position. For example, forwards can make more runs wide to collect the ball and fullbacks can make more overlapping runs. ℹ️ DESCRIPTION
It affects the amount of risk the ball possessor takes when making passes to create chances in the final third. This also affects the emphasis on forward runs and support runs by teammates of the ball carrier. It ranges between 1 and 100.

⚫⚪⚪ 1-33 | Safe
To maintain possession, the team will rarely try a pass that may risk losing the ball, choosing to wait for the ‘ideal’ opportunity. Players will ensure that the ball possessor has safe options when positioning themselves and will wait for a good opportunity to make a penetrating run.

⚪⚪⚫ 67-100 | Risky
The team will always try for the killer pass. Players look for every opportunity to make runs into space and behind the defence. Teammates won’t be as concerned about ensuring safe options for the hall possessor.

ℹ️ DESCRIPTION
It affects the tendency and frequency for players to put crosses into the box. This also affects the timing of when players make runs into the box and how many players will look to get into the box to get on the end of a cross. It ranges between 1 and 100.

⚫⚪⚪ 1-33 | Little
The team tries to avoid crossing the ball. Instead, they will try to play out of the crossing zone by passing back or getting to the end line looking to cut the ball back to a teammate for a shot.

⚪⚫⚪ 34-66 | Normal
The team will put crosses into the box when there is a good opportunity.

⚪⚪⚫ 67-100 | Lots
The team try to get the ball into the box at every opportunity. The ball possessor will try to cross the ball early. Teammates will make earlier runs into the box.

ℹ️
It affects the number of shots that the team will take in the final third. It ranges between 1 and 100.

⚫⚪⚪ 1-33 | Little
The team will be patient and only shoot if the opportunity is extremely good, instead opting to keep possession. Long shots will be rare.

⚪⚫⚪ 34-66 | Normal
The team will perform a variety of long shots and short shots depending on the situation.

⚪⚪⚫ 67-100 | Lots
The team will shoot at every opportunity. Teammates will make the extra effort to position themselves looking for shooting opportunities. For example, staying just outside the box and looking for a layoff, or positioning themselves for the cutback.

ℹ️ DESCRIPTION
It determines the freedom that players have to make runs and support in positions that stray from their formation position in the final third of the pitch. It ranges between 1 and 100.

⚫⚪ | Organised
Players tend not to stray too far from their assigned positions during the course of the match.

⚪⚫ | Free Form
Players have the freedom to make runs out of position. ℹ️ DESCRIPTION
It determines how high up the pitch the team will start to pressure the opposition.

⚫⚪⚪ 1-33 | Deep
The team will drop back and allow the opposition time in their own half in exchange for getting numbers behind the ball.

⚪⚫⚪ 34-66 | Medium
The team will start to defend in their opponent’s half but not the full length of the pitch.

⚪⚪⚫ 67-100 | High
The team will apply full pressure in their opponent’s half. Wide midfielders and fullbacks will push high on the ball side to make it difficult for the opposition to play out. This tactic is effective but leaves lots of space open for the ball over the top behind the defence.

ℹ️ DESCRIPTION
It determines how hard the team will tackle and how much pressure is applied to the ball possessor. But be careful, high aggression can result in a higher number of fouls. It ranges between 1 and 100.

⚫⚪⚪ 1-33 | Contain
The team tries to contain the ball possessor, with players rarely diving into tackles or trying to outnumber the ball carrier.

⚪⚫⚪ 34-66 | Press
The team dives into tackles hard and will slide whenever possible.

⚪⚪⚫ 67-100 | Double
The team will look to tackle fiercely and in numbers, sending an extra player to the ball possessor as often as possible.

ℹ️
It affects how much the team will shift to the ball side when defending. It ranges between 1 and 100.

⚫⚪⚪ 1-33 | Narrow
The team will defend compactly. Players will pinch in on the far side to cover teammates and allow for ball side pressure. When the ball is central the team will pack the middle of the pitch and allow more room on the wings.

⚪⚪⚫ 67-100 | Wide
The team will not pinch as much. Players on the far side will mark opponents tightly, sacrificing cover in favor of making it difficult for the opposition to pull them out of shape.

ℹ️ DESCRIPTION
It affects the defensive shape and the defending strategy.

⚫⚪ | Cover
The players will keep the shape of the team.

⚪⚫ | Offside Trap
The defensive line will work as a block to leave the opponents offside.