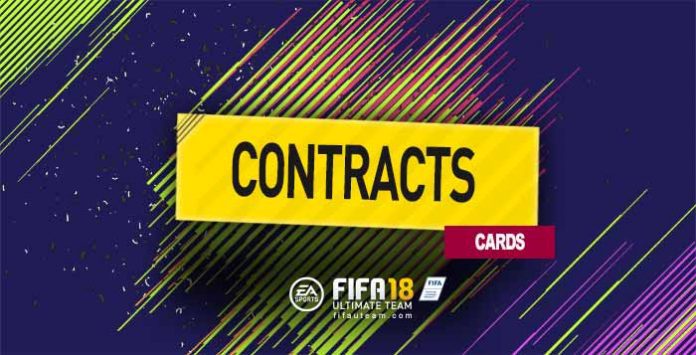 Learn everything about FIFA 18 Contract Cards, including how they work, a list with all these cards and a guide to help you decide if you should use them or not.

What FIFA 18 contract cards do?

The most important FIFA 18 Ultimate Team cards are the players, and then the contracts. Strategically it is a card with great importance, because it is the only consumable required in order to be able to play matches.

The role of the contracts is to increase the amount of games that a manager or a player can play.

The number of contracts printed on their cards decreases every time you use them in a match. When the number of matches printed on the players or managers cards reaches zero, they cannot be used in a match until you apply them a contract card again. These cards can be applied in any time. You don’t have to wait until they run out of contracts. The players or managers cards that are out of contracts, are distinguished from the others by having a folder icon and they can be sent to the transfer list like all the other contracts cards. All contracts included in FIFA 18

The contracts represent the operating expenses of the club. We can not live without them. The numbers inside the coloured box of contract cards represent how many extra matches players or managers can play if you apply them that card. For example: if you apply a contract card to a silver player, he will be able to play more matches according to the grey rectangle of that contract card, no matter the quality of that card.

The number of matches that a player/manager card has can not be higher than 99. You can apply FIFA 18 contract cards up to a maximum of 99 per player/manager. It is also not possible to apply contracts to players on loan.

Anyone that plays a match spends a contract, even if he started the match on the bench. That’s why you should avoid to make many substitutions.

It is advantageous to apply a contract card of the same quality of the player card. However, it doesn’t need to be like that. For example: you can apply a bronze contract card to a gold player.

The big trick is not do not spend a lot of coins on contracts but store managers in your club that give you a bonus up to 50%. Furthermore always study the relation price vs amount of matches. Sometimes a silver contract card may be the cheapest option for your gold player. Should I buy FIFA 18 Contract Cards?

No one can lives without contracts. You will need to buy them if you want to play. You have no choice.

Historically the contract cards have never been cheap. Given its strategic importance in the game, there was a strong tendency to make price-fixing with them. It was normal to see contracts being sold by more than 1,000 coins at the second half of the season. However, since FUT 14, EA have increased the amount of contract cards on the market and the prices have been going down. The most expensive one, the gold rare, are now being sold by less than 500 coins. At certain times, like huge Happy Hours, special In Form releases and at the beginning of the game, these cards can be purchased by only 150 coins. Stay alert.

For each match you play, you spend something like 80 to 100 coins on contracts.

If you have a player running out of contracts and if you believe that he will be an important player to your club, go to EASFC catalogue and redeem the 99 contracts card item. The next time you open your Ultimate Team, you will be asked which player you want to apply this special card to. You will be able to play 99 matches with that player and after that you will need to apply another contract card.

FIFA 18 Contract cards are not cheap, so you should pay attention to the following tips:

✅ for the same price, always choose the contracts’ cards that give you more matches;
✅ do not apply contract cards with many matches to players or managers who you do not know will be in your club much more time;
✅ do not waste contract cards if it exceeds the 99 matches;
✅ only make substitutions that are strictly necessary.

If you have stored managers on your club, you will get a bonus up to 50% when you apply a contract card.