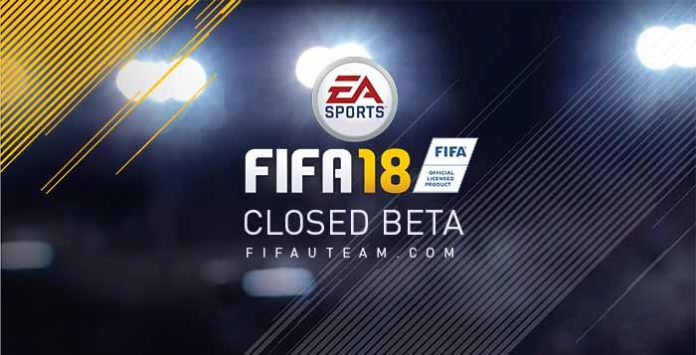 For most of the players, the FIFA 18 Closed Beta is the first chance to play the new EA’s title. We will explain here how it works and how you can access to it.

How EA announced the FIFA 18 Beta?

What’s new?t
EA’ve changed up the FIFA Beta access process this year. They’re emailing selected players with their Beta codes. They only have enough codes for the players that they sent emails to. If you didn’t get an email with a code, EA Advisors won’t be able to give you one.

Check that you get their emails
Make sure you’ve opted in to get EA emails. Go to the EA Sports FIFA Contact Preferences page and check the first box.
If you’ve changed your email address or no longer have access to the one you used to create your account, swap emails from one account to another.
You can also add a secondary email address to your account. A secondary email helps you reset your password if you’re locked out of your EA Account and primary email address. You can find the Secondary Email section under the EA Account Security tab.

Can I get a few more FIFA 18 beta details?
Selected FIFA players in the US and the UK who opted in to get EA emails will get an email at the email address that’s linked to their EA account.
Because of limited space in the Closed Beta, not everyone will get an email with a code. EA only have enough codes for the players that they sent emails to. If you didn’t get an email with a code, EA Advisors won’t be able to give you one.
The email will include a Closed Beta access code for PlayStation 4 or Xbox One.

The rules
You must be 18 years or older.
You’ll need to have an Internet connection, an EA Account, and have accepted the User Agreement and the FIFA 18 Beta Agreement.
Live streaming and image capturing of Closed Beta gameplay or forums are against their rules as is discussing the content of the beta on the forum.
EA send all Beta communication from [email protected] Add this address as a safe sender to receive emails. Check your spam, junk, or social folder for any missed email messages from [email protected]

What is the FIFA 18 Closed Beta?

Q: What is the FIFA 18 closed beta for?
A: The main purpose of it is to test the game. It’s for players to try out a FIFA 18 game mode and give the developer feedback on anomalies they might find, and also suggest potential alterations. This beta has also got the particularity of promoting the game itself.

Q: How does the closed beta interfere on the game’s development process?
A: Just like the previous games, FIFA 18 is very complex joining several game modes together, for they’ve been developed over the years. There are several different teams responsible for developing determined projects and areas of the game that might or might not be integrated into the final product according to deadlines, the work’s quality and other economic and strategic factors. Which means that these teams are not always working for the next FIFA. The whole project must be exhaustively tested out for them to make sure it works correctly. For that, Electronic Arts usually invite a group of volunteers in their premises so they can test the game. After the adjustments regarding the first feedback period are made, the Alpha version is released. This is the version EA uses to show it to the public for the first time, at EA Play. The game’s official release occurs at the end of September and always comes along with an update that’s supposed to correct the anomalies detected after the disks are printed out. Between one thing and the other, there’s the beta and then there’s the demo.

Q: In which languages is the FIFA 18 beta available?
A: The in-game language for the Beta is English only.

Q: Can I use the Beta progress in the final game?
A: No.

Q: Is the Beta database updated?
A: No. The players and ratings used in the FIFA 18 closed Beta are the same ones of the FIFA 17.

When will be available the FIFA 18 Closed Beta?

Q: When were the FIFA 17 closed beta invites sent?
A: FIFA 17 beta invitations were sent out August 2nd, 2016 and were associated with your EA account (they cannot be shared).

Q: Is there a limit of players who can play the FIFA 18 Closed Beta?
A: Yes.

For which platforms will be available the FIFA 18 Closed Beta?

Q: Which platforms will the FIFA 18 closed beta be available for?
A: This test version is exclusive for Playstation 4 and XBox One. It won’t be available for PC, old-gen consoles or mobile platforms.

Q: I already played a closed beta on my old-gen console. Are you sure it is not available this year?
A: It’s true that the FIFA 16 closed Beta was available for Playstation 3 and XBox 360 but since last year it is not anymore.

Wich game modes will be available on the FIFA 18 Closed Beta?

Q: When exactly are each of these game modes going to be tested?
A: In the FIFA 18 closed beta all game modes will be tested at the same time, from the first to the last day. The difference is that the invites will be addressed specifically to Kick-Off and one of the other three game modes.

How to be invited and other questions

Q: If I get an invitation, for which game mode it will be?
A: If you get selected then EA will most likely add you to the mode you played most.

Q: How can I play the FIFA 18 closed beta?
A: Only players that are invited will be able to play the closed beta. Stay alert to your mail box, the one you use for your FIFA account, to see if you were invited or not. Pay attention to all folders, including spam.

Q: Is the FIFA 18 beta available for players from every countries?
A: No. Only select FIFA 17 players in North America (United States and Canada) and the UK who opted in to receive EA emails will receive an email at the address associated with their EA account. Example of a FIFA 18 Beta invitation

Q: I’ve received an invite for the beta in my e-mail. How do I know it’s legit?
A: Carefully verify if the sender’s email looks like this: [email protected]ea.com. According to Electronic Arts, all Beta communication are sent from [email protected] Add this address as a safe sender to receive emails. Check your spam, junk or social folder for any missed email messages from [email protected]

Q: I received an invitation. Does that mean I’ll play the beta?
A: If you accept the invite, then you will.

Q: What criteria do they follow while picking the players who earn invitations?
A: Generally speaking, the selection process is random.

Q: Do I have better chances to play the Beta if I live closer from EA offices?
A: No. If you live in US, UK or Canada, then location has nothing to do with the selection.

Q: Do I have better chances to play the Beta if I played a lot of FIFA 17?
A: To be selected, you must have played a certain amount of games. However, it doesn’t need to be a lot of games. There are people who have played thousand of games and will not be invited.

Q: Do I have better chances to play the Beta if I am good at FIFA?
A: No. Your record has no influence.

Q: Is there anything I can do to improve my chances to be selected to the FIFA 18 closed Beta?
A: Yes. If you want to increase your eligibility for FIFA 18 Beta, check your Contact Preferences under Privacy Settings in My Account on origin.com and select the first box. You can also check if FIFA is available in the ‘Game Tester Program‘ tab.
Another way to improve your chances is to become an EA Sports FIFA Insider. To do that, go to this page, login with your EA account and check the box ‘EA may email me about EA news, products, events and promotions’. Good luck!

Q: Can I request an invitation to EA?
A: No. Closed Beta has limited space. Not everyone will play it. If you haven’t received an invite to play, then you will not play. Game advisors cannot authorize and provide email invites if you did not receive one. They can’t do nothing for you.

Q: I’ve found invites for sale. Are they legit?
A: They’re almost never legit because invitations are always associated to one Origin account.

Q: By accepting the invitation, what am I obliged to?
A: You’ll need to fulfil the agreement of the closed beta, which includes a confidentiality term.

Q: What does the confidentiality term consist of?
A: It basically forces the participants not to divulge any information regarding the game outside of the forum created for this purpose. Hence closed beta. Live streaming and image capturing of Closed Beta gameplay or forums is against the rules.

Q: What happens to those who don’t fulfill the confidentiality term?
A: They’ll lose access to this beta and to any other that’s released afterwards. Other measures can be taken for cases that are more serious.

If you’re one of the lucky ones that will get to try out FIFA 18 before everyone else, congratulations. Have fun testing the FIFA 18 closed beta and try making this game even better.