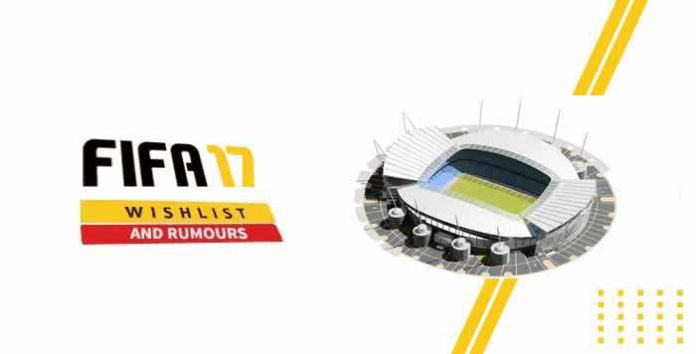 Everyone loves new stadiums. Fact. And we can confirm right now that new stadiums are coming to FIFA 17. But which ones ? Share with us your new stadiums wishlist and get to know if the rumours will meet your expectations or not.

This is the time of the year when everyone has an opinion. Everyone dreams with the perfect FIFA. Let see what the community wants. Write in the comments section which new stadiums you would like to see in FIFA 17.

There are many FIFA 17 rumours, but most of them are fake. We picked the most reliable rumours, added our perception and share our opinion with you about the most likely FIFA 17 stadiums.

In the previous years, the most wanted stadiums were the Türk Telekom Arena, Estádio da Luz, Celtic Park and Maracanã. But none of them should be added in FIFA 17. It doesn’t mean that the new additions will not be exciting. Let’s see… It is unlikely to add a new league to the game without a new stadium. That’s what happened with the addition of the Japanese league to FIFA 17. Suita City Football Stadium was the stadium added to the game. The stadium is home of the J1 League football club Gamba Osaka since 2016 and replaced Expo ’70 Commemorative Stadium, which had been their main stadium between 1980 and 2015.

The Olympic Stadium was just transformed for the 2016/2017 season. West Ham United has a new home and there are good chances that it will be featured on FIFA 17.
As part of the Barclays Premier League deal two years ago, the stadiums of all clubs have to be in the game. This year, Hull City, Burnley and Middlesbrough were the clubs promoted. The first two already have their stadiums in the game. It’s time of the Riverside Stadium. The list of the new stadiums will be larger for sure. There is a chance to see EA Sports introducing in the game all the stadiums from La Liga, just like they did two years ago with the Barclays Premier League stadiums. That would increase the level of authenticity to something never seen before. We believe that they will add, at least, more three or four Liga BBVA stadiums (they have the license for all of them) but we will have to wait to know.