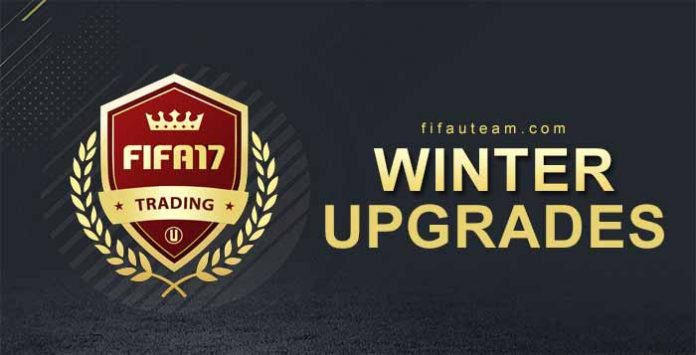 What impact do Winter Upgrades have over the FIFA 17 transfer market? When should I buy a player whose card was upgraded? Do IF cards from players who received an upgrade have their price increased as well? It would be great to know the answers to all of these and other questions, wouldn’t it? That’s why we’re publishing this guide which analyses the variations of the FIFA 17 Winter Upgrades Prices. Knowledge is power!

In the past three years we have been collecting information on the prices of hundreds of players’ cards, in different stages of the season, including during the Winter Upgrades Season. We’ll use them not only in order to predict what is going to happen in FIFA 17, but also to publish other more specific and detailed trading guides.

This series of trading guides we’ve been publishing obeys to a logical sequence. If you haven’t read one of the previous articles, we recommend you do it now. As we have said here before, prices on the FUT market vary according to several factors, like for example the type of card, the player, his real life performance or the release of promotional packs. That’s why it’s impossible to describe with 100% accuracy what is going to happen with the price of a determined card because every case is a different case. What we’re doing here is give you a general idea of the evolution in the average card’s price. It doesn’t mean all cards will behave the same way at some point. We’re talking tendencies only. So now that’s been warned…

Predicting the price of a card isn’t an easy task. This year it’s even harder. The FUT market has never been so unpredictable as it is now.

We analysed these variations very carefully throughout the year and were able to come up with some important conclusions.

IF Cards
Just as the IF cards are upgraded, they either become considerably more expensive or slightly cheaper than before.

NIF Cards
The UP cards from the most popular players are the ones that suffer the most valorisation in regards to their previous cards.

Now that you have an idea of how the FIFA 17 Winter Upgrades prices vary, it’s time to go deeper.

The behaviour of the prices of players who receive an upgrade in February varies according to their own popularity and card rating.

For the most popular players, with overall rating above 84, the initial prices of the UP cards just as they’re launched reach extremely high values. Rarely a new card arrives costing less than double the price of the previous card, sometimes reaching up to four times that price. These UP cards lose value continuously through the next couple of weeks, although the biggest price drop occurs already on its first week on the market. Only on the first two days, most of them tend to lose half of their value. If you’re interested in acquiring some upgraded players, we recommend you sit back for few days before buying them.

For less popular players, with overall rating below 79, there are no big differences between the prices of the new cards just as they’re launched and their prices in the future. Even in regards to the previous cards, these new cards don’t normally go through a considerable valorisation.

You might not even be interested in the winter upgrades season, but if you have a NIF card of a player who received an upgraded card, you may wanna know what happens to its price. Actually, little will change. The devaluation of your card will evolve in a more accelerated rhythm than before the arrival of the UP card, but it will still be a devaluation of less than 10% on the first week. After this period, the devaluation rhythm goes back to what it was like before the winter upgrades season. Variation of FIFA 17 Winter Upgrades Prices for IF Cards

The NIF cards aren’t the only ones that receive upgrades. Their corresponding IF also have their attributes upgraded during the month of February. Given this hypothesis, many FUT players invest their coins in the IF cards of the most promising players expecting some return a few weeks later. This speculation begins normally just as the Team of the Year ends.

According to the speculation revolving around a determined card plus the predictability of a potential upgrade, there is a price adjustment when the upgrade is confirmed. Normally this price variation can occur as increments of up to 20%, or in some rare cases a loss of value of up to 10%.