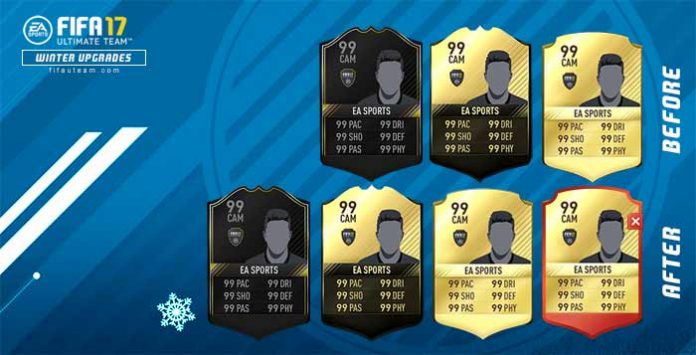 Why the rating of my NIF card wasn’t improved? Which IF cards will be upgraded in February? What happens to the TOTGS and to the Scream cards during the FIFA 17 Winter upgrades season? We try to answer to all these questions (and much more!) explaining you, with the help of a few examples, the FIFA 17 players stats and ratings upgrades rules.

This article is based on the official upgrades rules of FIFA 17.

Rule 1
Upgrades AND downgrades apply to new non-inform players found in packs. Non-IF players in your Club will not receive an upgrade or a downgrade.

Rule 2
If an upgraded player’s new OVR rating equals or surpasses his existing first in-form’s rating, his IFs will get an upgrade.

2.1. An exception is made for lower rated players with significant upgrades.

2.2. Does not apply to Movember or Ultimate Scream items.

Rule 3
If an upgraded player’s new OVR rating does not equal or surpass his existing in-form’s rating, his IFs will not get an upgrade.

3.1. However, if an upgraded player with an existing IF gets upgraded across Quality tiers (eg. Silver to Gold), his lower-quality IF will not get an upgrade. This preserves the in-form’s high value.

Rule 4
Downgrades to non-IF players will not affect their In-Forms or special items, should they have any.

How the FIFA 17 Winter Upgrades Work for NIF Cards?

It is not possible to improve the stats of any regular card. However, if a player stands out in the real world, in such a way that his card becomes strongly outdated, Electronic Arts comes to justice introducing a new type of card.

The February upgrades and downgrades affect around 400 ratings that cannot go down. The gold cards are usually improved in 1 or 2 points, which is explained by the fact that they are only assigned to players who had a marked development and not to minor adjustments. Silver and bronze players are usually upgraded by at least 4 points, while in exceptional cases this upgrade can sometimes reach 15 points. The higher is the original rating, the lower is the boost.

When a player is upgraded or downgraded, the cards that start coming in packs have got the new ratings and attributes according to his performance on the real life pitch. These new cards, which becomes available in packs until the end of the game, replace the correspondent day 1 regular card.

It is rare but the position of the players in these cards may change if, they played really well in a different position.

FIFA 17 Upgraded Players Cards are physically identical to the originals, except on rating and stats. How the FIFA 17 Winter Ratings Upgrades Work for IF Cards?

The things get more complicated when we try to explain what happens to IF cards during the FIFA 17 Winter upgrades. Different to what happens with the NIF cards, the IF cards released before the upgrades will be upgraded in the same proportion as those (but automatically) if an upgraded player’s new OVR rating equals or surpasses his existing first in-form’s rating. When an upgraded player with an existing IF gets upgraded across Quality tiers (eg. Silver to Gold), his lower-quality IF will not get an upgrade. According to EA, this is so “the IF card’s value and bronze/silver squads are not negatively affected”. The goal is to preserve the in-form’s high value.

It is important to make clear that, contrary to what happened in previous years, when a player is upgraded, the stats of all his IF cards only get a boost if the rating is also upgraded.

To make the things more clear, we will take a look to a few examples. Let’s take Asenjo as example. He started the season with an 81 rated card but in the Winter Upgrades he got an 84 rated UP card. His 81 rated card stopped coming in packs as soon as the 84 rated one was released, but his owners were never rewarded with any upgrade at all because that’s only valid for IF cards. Since he already had an IF card, 84 rated, and since new OVR rating equals his existing first in-form’s rating, this was automatically upgraded to 87, which corresponded to the three points upgrade his regular card received. However, since there is no other card with a better rating than this one, EA may decide to upgrade it to 85. Any potential future IF card would be rated over the new IF rating. In this case, the new overall rating is lower than the one from the first IF card. The new 85 rated card replaces the 84 rated one in packs, but the overall ratings of his three IF cards don’t change. If the boost was two points, the three TOTW cards would be also improved. However, if you pay attention to the image, you will see that the stats of the IF cards have changed. For each attribute, the bonuses were the same of the difference between the regular and the UP card. This was how it was supposed to work on previous years but not in FIFA 17. Let’s give another example with another player that will probably receive an upgrade. The rating of his new NIF card (72) will be lower than the rating of his first IF card (73). It may looks natural to you that his IF card doesn’t get an upgrade but it isn’t so obvious. In fact, that only happens because his UP card isn’t upgraded across quality tiers. If, for example, his TOTW card was 76 rated and his new card was 75 rated, all the IF cards would be upgraded accordingly except the lower-qualify IF card.

What is new this year?

Since there are new cards this year, there is also new rules too. Let’s look to a few examples. Scream cards were released for the first time in FIFA 17. In our opinion, they are IF cards because they feature improved stats. However EA doesn’t agree with us, and this will not happen. For them, Scream cards have no influence in the Ratings Refresh. We know that MOTM and iMOTM cards are upgraded respectively when the overall rating of the UP card is equal or higher than the lowest IF card. However, EA decided that it shouldn’t happen to Movember cards. Another common question is what will happen to the SBC, POTM and FUT Champions items. The reason to IF cards get upgraded is because otherwise they would losing value in the market. Well, as you know, you can’t sell SBC, POTM or FUt Champions items because they are untradeable. However, EA decided to upgrade SBC and POTM items but not the FUT Champions cards.