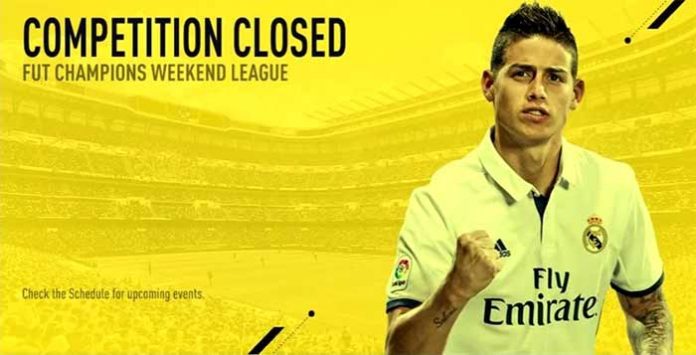 The Round 16 of the FIFA 17 Weekend League was cancelled. We published this article to answer to the most common questions, like the ones about rewards, qualification and calendar.

Q: Why the FIFA 17 Weekend League of this week was cancelled?
A: The round 16 of the Weekend League was cancelled because Electronic Arts is addressing the ‘No Loss Glitch’ and while they don’t have it finished, it is not possible to guarantee a fair competition.

Q: How this glitch works?
A: It allow people to automatically disconnect an opponent from a game and give themselves either a win or a disconnect loss.

Q: What is the official statement from Electronic Arts?
A: “As part of our commitment to keep FUT Champions the most fair and fun place to compete, we are cancelling this week’s FUT Champions Weekend League while we address some technical issues“.

Q: Which round is being cancelled?
A: Round 16. The one that was supposed to be played from January 20 to January 23. You can know more about this round clicking here.

Q: What happens with the qualification I won for the round that was cancelled?
A: If you had already qualified for this week’s FUT Champions Weekend League, your qualification will carry over to next week.

Q: How many daily knockout rounds will give qualification for round 17?
A: Four. Two from the previous week and two from the week before the round starts. You can see here all the details about these daily knockouts.

Q: Is there any difference in the FUT Champions calendar for FIFA 17?
A: Yes. The second daily knockout for the round 17 was extended for another 24 hours.

Q: How this will affect the FUT Champions monthly rewards?
A: Monthly rewards for January will be based in the games you have played on rounds 14, 15 and 17.

Q: Does it means that it will be more difficult to rank well because now I have less 40 matches to play?
A: No. The monthly ranks for FUT Champions have been corrected. You can see the new win requirements for January clicking here.

Q: Where I can find more details about the FIFA 17 Weekend League rewards and calendar?
A: Here and here.