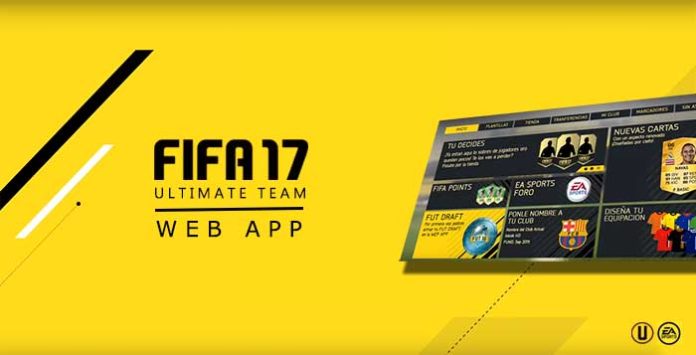 FIFA 17 Web App will be available soon. But what is the release date? How can you access it? We are here to clarify these and many other details about the FUT 17 Web App.

The FUT Web App was taken down for maintenance on September 16.

When FUT 17 Web App will be launched? When will be launched the FIFA 17 Web App? Except EA, no one can confirms the FUT 17 Web App release date. However, according to our past experience, the most likely date is Tuesday, September 20th, 2016.

It is very hard to find out in which date the FIFA 17 Web App will be launched because EA Sports never launch in the announced date to avoid servers overloaded. They will probably announce it a week before its release but you should try to login one or two days before the official date.

You can see the release dates of the last five years in the following table:

The expected release dates for FIFA 17 Ultimate Team are:

How to Get Access to the FIFA 17 Web App

FIFA 17 Web App early access, also know by Webstart, is only available for returned players. It means that only players who have created a security question/answer before August 1st 2016 will be able to use it. If it is not your case, you will see a picture like this one and you will need to play in the console first before you can access to the App. In other hand, if you played FIFA 16 you will have to buy and play FIFA 17 in your console until midnight of October 1st (UK time) to keep using the FUT Web App for FIFA 17.

To access the FIFA 17 Web App, just follow this link. Please note that it will currently be live for FIFA 16 Ultimate Team, until it’s under maintenance for FIFA 17. Once it goes online again, it is not possible anymore to access the FUT Web App for FIFA 16.

Login Verification is a mandatory step before you can access the FIFA 17 Web App. If you never activated, just go to your Origin account here and enable it. Then, just confirm the email or sms they have sent to you, verify your FIFA Ultimate Team Secret question and answer and store your codes in a safe place. As simple as that. If you already did it in the past, all will need is your EA account email address, password and answer to your secret question.

Why FIFA 17 Web App early access is so important FIFA 17 Web App early access is not a great time to make the first coins. As usual, you can buy low and sell higher but, since no one is playing it for the first time, it will be very difficult to make much coins with trading. Hopefully, there are offers you can use to boost your game:

Starter Pack
The Starter Pack includes 34 cards, mostly bronze (29 more 2 silver and 3 gold). This pack, besides enough players to start playing, where silver and gold are included with 45 contracts each one, possesses also everything your club needs to start. In other words, the club item cards which will be part of the pack will be: at least one stadium, one ball, one badge and two kits (home and away). All the cards of this first pack are untradeable, which means that you can not sell it.

Welcome Back Packs
The Welcome Back Packs reward returning users for their loyalty – their FUT 16 gaming activity . Most of the 12 cards in each pack will be gold, for which these offers assume particular importance in the start of your club. You’ll be rewarded too with two all players packs, each one with 4 bronze players cards, 4 silver players cards and 4 gold players cards (at least one rare).

Daily Gifts
During the first days Daily Gifts will also be offered, so the sooner you start the more you can win. Don’t forget to access your Apps every day. Each day you miss, it is one pack less you get. In the beginning you’ll need all the cards you can get to start your first investments. The first daily gift will be available until midnight (UK time) of FUT Web App release date and the last one until midnight (UK time) of Monday, October 3rd. Cards are more expensive in the early days, meaning daily gifts are relatively worth significantly more. Don’t forget to redeem your daily gift if you want to have a good start. For more Daily Gifts details, including when they will be available and what you can receive, please click here.

The most important questions about the FIFA 17 Web App Q: What is the FUT Web App?
A: The Web App, also known as FUT Web, is an online extension where we can manage our FUT club. Both names are abbreviations for FIFA Ultimate Team Web App.
The FUT 17 Web App is the central for all FIFA 17 Ultimate Team enthusiastic. You can do almost everything you do on the platform (Playstation, XBox or PC). Obviously, playing matches is one of the few exceptions.

Q: Why should I use the FUT Web App for FIFA 17?
A: The big advantage of using the FUT Web App is that it is a faster and more comfortable way to managing one’s club. Most traders use it for searching, selling and buying cards because these actions imply frequent quick visits to the market during the day.

Q: Is FUT Web App free?
A: Sure. You just need a PC with an internet connection and the last version of Flash installed.

Q: What can I do with the FUT Web App?
A: Searching, selling and trading cards;
Organizing and testing the chemistry of the squads;
Sharing your squads with your friends;
Buying and opening packs;
Checking the Team of the Week;
Consulting and interacting with all the cards you have on the club;
Consulting the leader boards.

Q: How often does the FIFA web app goes down for maintenance?
A: Not very often. You can follow all the FIFA 17 maintenance down times in this page.

Q: How can I take advantage of early access?
A: Follow the tips we have in our FIFA 17 Starting Guide.

Q: Why I can’t buy FIFA Points in the Web App?
A: FIFA Points are only available before the game release date in the early access of EA & Origin Access subscribers.