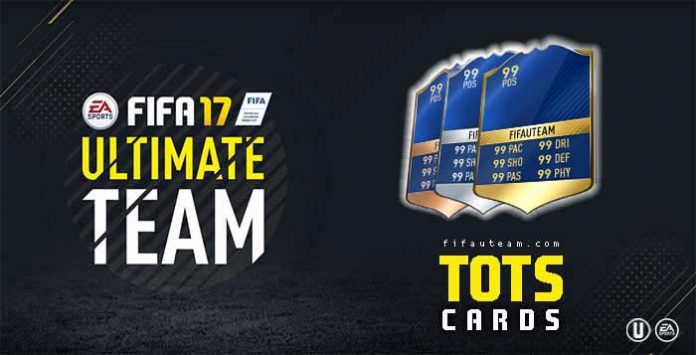 FIFA 17 TOTS cards are the most waited In Form players cards of the game. Let’s learn something more about these blue cards.

What is the Team of the Season?

Since FUT 12, that in every end of the season (European calendar), more exactly in May and June, EA Sports build teams based on the players real performances on that season. Unlike what happens with the TOTY, in the TOTS the players are chosen by their performances in the season and not for the full calendar year. Instead of releasing a single team, the Team of the Season is made by around sixteen squads, each one of a popular league or region. Besides these ones, a All-Star MLS is also released in early August.

Each Team of the Season has 23 or 18 players that can be of any quality. Depending of which TOTS we are talking about, the players may be chosen by the community (Community Team) or by Electronic Arts (other ones).

To each one of these players it is assigned a new blue card, replacing the corresponding regular card. In other words, during the period that a player gets his TOTS cards in packs, it is impossible to find his regular card there. Your odds of pulling a TOTS card from a pack are exactly the same of pulling the regular card of that player in another time.

If you own the regular card of a TOTS player, your card will keep unchanged. If you want the improved version, you will need to buy the corresponding TOTS version in the market or pray to pull it from a pack. When FIFA 17 TOTS Cards will be available?

The Team of the Season is released once per year. In FUT 17, the estimated date for the first TOTS announcement is May 19, 2017 (Friday).

The release of the FIFA 17 TOTS cards are responsible for one of the biggest market crashes. It is made in a time when many gamers already have their solid teams and are looking for a way to improve them without spending all their coins in TOTS cards and getting better improvements than the ones from TOTW cards.

The estimated dates for each squad are:

From May 26 Friday to June 2 Friday
Premier League TOTS

The ratings and attributes of FUT 17 TOTS cards are usually boosted in four, five or six points. The attributes have a similar increase but it doesn’t mean that all attributes have to be improved. The position of the players in these cards may change if, in the most of the season, they played really well in a different position. If a player has moved from one club to another one, he is candidate to a TOTS card only in the club where he was in form.

You can have the regular card and the TOTS card of the same player in your club. However, you cannot use them both in your squad at the same time.

Each player can only have one TOTS card, even if he was elected for more than one team of the season. For example, he may be chosen to the Community or EASFC TOTS and make also part of the TOTS of the league where he plays. Any of these cards will be exactly the same.

What happens to the TOTS cards’ prices?

During one month, between May and June, EA Sports selects the best players of the season for each of the main leagues and releases them in several teams named Teams of the Season. Alongside the TOTY, this is the moment responsible for the biggest price falls in the game.

Although it seems like there are similarities between the TOTY and the TOTS, they’re not that similar and for that their effect on the market is also distinct. Firstly, the TOTS is responsible for the release of many more blue cards but none of them are in the same level as TOTY, and for that reason their price is always lower. The remaining cards’ prices are lower during TOTS because it’s closer to the end of the game, and as you’ve already realised cards prices tend to go down with time. The biggest difference between them is about duration. While the TOTY only goes for a week, the TOTS keeps going for several weeks and that contributes for bigger windows of opportunities. Instead of selling all your cards and then buying them again, you can take advantage of the price fluctuations along the TOTS weeks in order for you to get rich.

TOTS players tend to sell for the most FIFA coins right after they are initially released into FIFA packs. They generally tend to gradually decline until they level out and either hold their value, or slightly increase again. The FIFA 17 TOTS cards prices are affected by the player popularity, the league, the position and the new ratings.

In the coming weeks, we will add a much deeper explanation to what will happen to the FIFA 17 TOTS cards prices in the market.

What you need to know about FIFA 17 TOTS Cards

Q: What is the Team of the Season?
A: Team of the Season, commonly abbreviated to TOTS, is a team of IF players released on a yearly basis. These blue In Form cards are assigned to the best players based on their real performance on the season.

Q: What is the difference between Team of the Year and Team of the Season?
A: TOTY is a team made by the players who played better during the calendar year, according to the FIFPro’s voting. The TOTS has nothing to do with the calendar year. It is about the players of each league who have played better during the season (usually between August/September and May) and they are not chosen by FIFPro members.

Q: Which one is better: TOTY or TOTS cards?
A: To the same player, TOTY card has better stats than the TOTS version. That’s why they are more expensive.

Q: Who chooses the players for the Team of the Season?
A: EA Sports, except Community squads which are chosen by the community.

Q: Can a TOTS player’s rating change?
A: TOTS card ratings remain unchanged after being implemented into FUT 17.

Q: Which players have the biggest boost?
A: Usually the ones with lowest rates, like the ones from the Most Consistent but never IF TOTS.

Q: Are TOTW released at the same time of Team of the Season?
A: Yes. Team of the Week are released interrupted every Wednesday.

Q: How long are FIFA 17 TOTS cards available in FIFA packs?
A: The squads of the most popular leagues lasts in packs a week while the other squads are only available in packs for three or two days.

Q: How can I get one of these cards ?
A: You can get a TOTS card in the same way you can get any other card: on packs or on the transfer market. If you want to try your luck on packs, you can go to the store and buy them with coins or FIFA Points. The chances of pulling a TOTS card in a pack are low.

Q: Will FIFA 17 TOTS cards be released all at once?
A: No. Each week, at least two new squads should be released.

Q: How easy is to find FIFA 17 TOTS cards in FUT packs?
A: Your odds to find a specific TOTS card are the same of finding the respective regular card in another time.

Q: In which FUT packs I can find FIFA 17 TOTS cards?
A: TOTS players can be found in any pack players cards. Obviously, the chances of finding one of these cards are higher if you open a pack which contains more player cards.

Q: Can I store packs to open during the TOTS week?
A: Yes. It doesn’t matter when you got the packs. The cards you will find inside depend exclusively of the date you open them.

Q: How many squads will be released ?
A: There is one Team of the Season for each one of the most popular leagues. There are around eighteen squads in FIFA 17 Ultimate Team.

Q: What is the ROTW Team of the Season?
A: It is a team made with the best players of the season from the whole world except the ones from other TOTS.

Q: Can a player be released in more than one TOTS?
A: Yes. All players from EAS FC TOTS are picked from the others Team of the Season. Besides that, a player released in MC TOTS can also be re-released in the respective league’s TOTS. When that happens, the new card has exactly the same overall, stats and position.

Q: Are FIFA 17 TOTS cards available in the FUT Draft mode?
A: Yes, they are available in all modes, including FUT Draft and FUT Squad Building Challenges. Obviously, you can only find one of these blue cards after its release in May/June.