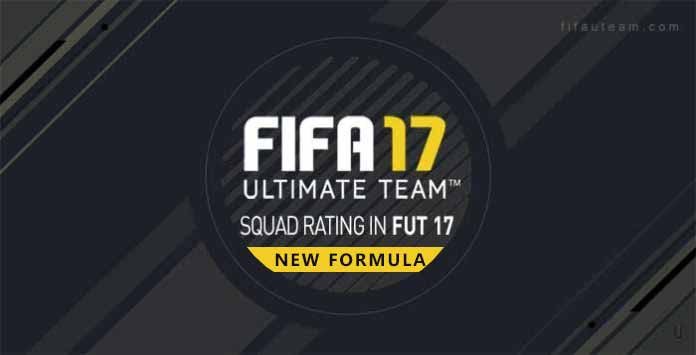 A month ago we published a guide explaining how the FIFA 17 squad rating works and how non-sense was the formula used to calculate the team rating overall. A few days later, Electronic Arts released a new title update, changing the formula. We are now publishing a revised guide with all you need to know about the FIFA 17 squad rating, including an explanation about how switching a higher rated player with a lower rated player will not result anymore in the overall squad rating going up.

What is the FIFA 17 squad rating?

Team rating is a quality evaluation system that allows you to compare different squads. It measures how good, supposedly, a team can be.

This measurement is made through each player’s individual rating/overall in a team (all starting eleven plus the seven substitutes). It is, then, a little subjective, because a player with the highest rating is not always the best player.

The FIFA 17 Squad Rating varies between 0 (worst) and 99 (best). As the image illustrates, this number is shown on the superior right corner of the active squad menu. In this case, the team rating of our squad is 78.

If you want to know the team rating of your squad, check it in your console, companion or web app. Do not use squad builders, like FUTHead or FUTWiz, because the way how they calculate the FIFA 17 Squad Rating is not totally right.

Besides measuring the quality of the team, the FIFA 17 Squad Rating also provides another general rating: the Star Rating. The Team and Star ratings are related as the table shows.

The Team Rating is basically the result of the average between all 18 players’s overalls plus a correction value. This correction value is there to give different weights to the starting eleven, giving them more importance than the players that start on the bench.

The new way how FIFA 17 squad rating is calculated is not well known by the FIFA players community. For this reason, we will share it with you, trying to make it as simple as we can.

In order to find out the team rating you just need to know each one of the starting eleven and substitutes’s ratings. As it was said here, the first step is to calculate the average between all these 18 players’s ratings. You just need to sum all those ratings and then divide the result by 18. Each player whose rating is superior to the average contributes positively to the correction factor with the difference between these two numbers. For the substitutes, this factor is divided by two.

This is the general new formula used to calculate the FIFA 17 Squad Rating:

The Correction Factor CF is calculated in this way:

Remember that, only players with ratings higher than the AR can be used to calculate the CF.

Do you still have questions about how this new calculation is made? That’s natural. We will resume it in six steps:

1) Sum up the ratings of the 18 players;
2) Divide by 18 to get the average per player (do not round it);
3) For every player above the average calculate by how much they are above the average and sum this up (do not round it);
4) Add the value you got in the previous step to the one you got in step 1;
5) Round it to the nearest digit and divide it by 18;
6) Round down to get the final FIFA 17 squad rating by the new formula.

To make the things easier, we will look to an example of a Premier League squad without substitutes, just like it happens on Squad Building Challenges. We suggest to use this guide or the EA’s concept squad building when you want to test team ratings.

Step 1 – Sum up the ratings
This is extremely easy. Add up all these numbers together and you’ll get 910.

Rating according to the old formula

Imagine now that you replace Rashford by Jermain Defoe. What happens when you replace a 76 rated player by a 80 rated player in this starting eleven? According to the old formula, it would go down to 83. However, with the new formula, this was fixed and the rating is still 84. If you still don’t believe, try it by yourself:

What affects the FIFA 17 squad rating?

For those who are not very good at math, we gathered here some conclusions you can get from the FIFA 17 Squad Rating calculation in order to tear down a few myths.

– The FIFA 17 Squad Rating will never be inferior to the simple average between all the 18 players’s ratings because the correction factor is always positive;

– The starting eleven’s ratings weigh more over the Team Rating;

– The correction factor raises as the difference between ratings get bigger;

– The Team Rating does not depend on the reserves;

– The Team Rating does not depend on the players or team’s chemistry;

– The Team Rating will not vary if a player card is regular or IF as long as they have the same rating;

– When you add a better player to your squad, it is guaranteed that the team rating will not drop.

How to play against weaker opponents?

Star Rating, which gets its results from the FIFA 17 Squad Rating, is important in two different situations: in tournaments and matchmaking.

There are tournaments that require a maximum or minimum amount of stars. If you don’t know how to change your team rating, you won’t be able to disguise in order to earn your right to participate.

Matchmaking is the game system responsible for finding your team a fair opponent. One of the considered factors is the Star Rating. Pairing two players who have a similar team value is its role. If you don’t like to play against string teams, then you just have to artificially lower your Star Rating to the minimum possible without having to lose any players you intend to use. If you already learned how to calculate the Team Rating, then we don’t need to go any further.

There is an excellent trick that makes your way to the first division title easier. Want some help? Alright. Go to the auctions market and buy 7 low-rated players, the lower the better. Have you ever realized why unpopular players like Max Wright or Alex Atkinson are so expensive? That’s because they are the lowest-rated player of the game, and many people is already using this trick. You don’t have to buy these ones, because they are too expensive, but try to buy players with the lowest overall rating possible. Place them on the bench and play with your best starting eleven. If you feel like you need to place better players on the bench, do it, but know that because of this you’ll be facing an opponent with a stronger team.

Despite being very useful for many players, this trick has its disadvantages. One is that, most of the times, opponents who have weaker teams end up being tougher. A loss in these situations may demoralize a player, making him weaker for the next matches. Another disadvantage is all the work you have to go through in order to reorganize the team. Searching your club for other players will be frequent because of potential player injuries and suspensions. Also, when players have their fitness decreased, they have to rest between the reserves while a match goes on. That’s another problem. Finally, there’s that obvious disadvantage of not being able to make good substitutions in a match. If your connection isn’t very good you may end up facing a player with a better star rating than yours.

If you’re aware of this method, know that it’s possible to reach considerable star rating changes for your team. We tested adding the seven lowest-rated players of FIFA 17 Ultimate Team to the starting eleven we used as example to show how the team rating is calculated. The result was an impressive team rating decrease from 84 to 77, which means that the star rating also changed from five to four stars.