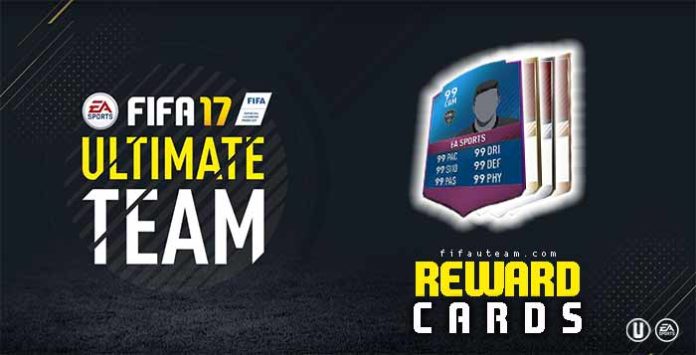 FIFA 17 Reward Cards are a brand new category of FUT cards that can’t be found in packs. They are only available as rewards of the new game modes Squad Building Challenges and FUT Champions. Let’s learn something more about these FUT 17 cards.

What is a Reward card?

In FUT Champions, players are able to compete in daily cups with the goal of reaching the weekly cups and monthly finals. They need to play consistently well and climb the monthly leaderboards to earn in-game rewards and have the opportunity to take their game to the world stage, including the Ultimate Team Championship and the FIFA Interactive World Cup (FIWC). Competition is the key word for FUT Champions. The game mode is viewed by Electronic Arts as the first step into the eSport world. That’s why this is the best rewarded mode of the FIFA franchise. Playing FUT Champions, the players are always able to win amazing in-game rewards like FUT packs, FUT coins and exclusive unique cards that can’t be found anywhere else.

In Squad Building Challenges, which are also available to play in the Companion App, the players have new opportunities to get creative and earn decent rewards. Users have a wide selection of dynamic scenarios to complete including Basic, Advanced and League Challenges. There are also various challenges that are updated throughout the season and even bigger rewards that are awarded when Group Challenges are successfully completed. Completing Challenges and Groups give access to FUT packs, coins and other unique items found only through Squad Building Challenges. The individual challenges themselves are rewarded with FUT packs and coins while completing groups gives access to even bigger rewards like unique player items. One of the aims of the Squad Building Challenges game mode is to allow players make use of cards they don’t need or leave rotting in their clubs, completing challenges and earning rewards for it.

Each one of these game modes has an exclusive reward card: blue and purple for Squad Building Challenges rewards; white for FUT Champions.

FIFA 17 Reward Cards (Squad Building Challenges on the left and FUT Champions on the right – gold, silver and bronze)

When the Reward Cards will be available?

FIFA 17 reward cards are always available in the game, since day 1. They can not be found in FUT packs or in the transfer market because they are untradeable.

The exclusive white players cards are assigned to a player when he stand out in FUT Champions. These cards are available in gold, silver and bronze qualities, according to the difficulty of the achievement.

You can have the regular card and the reward card of the same player in your club. However, you cannot use them both in your squad at the same time.

FUT Champions cards are not boosted. The only thing that changes i the colour. In other hand, Squad Building Challenges winners are rewarded with upgraded cards.

What happens to the Reward cards’ prices?

The FIFA 17 reward cards are untradeable. They can not be sold, which means that they don’t have a price.

Their impact in the transfer market is minimum. They only affect the other cards of the player that features in the reward card.

What you need to know about FUT 17 Reward Cards

Q: What is the a Reward Card?
A: It is a card that can not be found in packs or in the transfer market. They are unique items that players can get playing FUT Champions and Squad Building Challenges.

Q: When FIFA 17 Reward cards are released?
A: They are not available in packs. FUT Champions and Squad Building Challenge winners can get one of these cards since day 1.

Q: Can I sell one of these cards?
A: No. They are untradeable.

Q: Can a reward player’s card rating change?
A: No.

Q: How can I get one of these cards?
A: Completing challenges or winning in FUT Champions mode.

Q: Are FIFA 17 Reward cards available in the FUT Draft mode?
A: No, they are not.