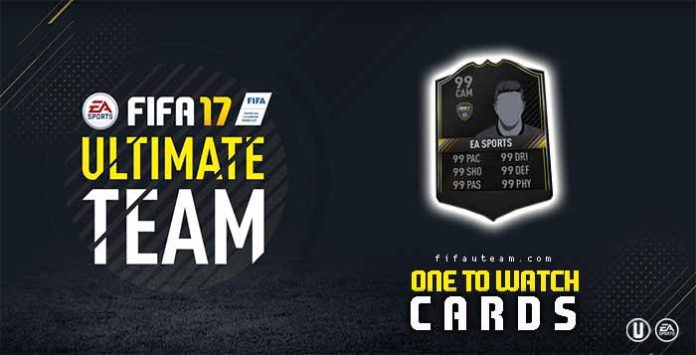 FIFA 17 Ones to watch cards were a great addition to the game. They replace the regular player cards from September 30 to October 10 (Summer Edition) and from February 3 to Febraury 10 (Winter Edition) and boost in rating and stats every time a player gets a new TOTW card. Let’s learn something more about these FUT hybrid cards.


FIFA 17 Ones to Watch Cards Introduction

What is a Hybrid card?

Ones to Watch cards are a brand new card category in FIFA 17 Ultimate Team and probably the biggest addition to the game this year. These black cards are assigned to a very limited selection of players announced on September 30 (Summer Edition) and February 3 (Winter Edition), replacing their regular cards in packs for a limited time.

Opposite to all other FUT cards, the OTW ratings and stats are not fixed. They increase or not depending on the player’s form. When FIFA 17 OTW Cards will be available? Who they are?

The Summer Edition of the FIFA 17 Ones to Watch cards are available almost since the first day. They were inserted into packs from September 30 to October 10. During this period, it was not possible to find the regular cards of this selection of players because the hybrid cards are replacing them.

There are 23 OTW cards featuring top-players with less than 30 years old who moved to new clubs on this summer transfer window. Here is the list of hybrid card for FIFA 17 Ultimate Team (Summer Edition): When FIFA 17 OTW Cards will be available? Who they are?

The Winter Edition of the FIFA 17 Ones to Watch cards will be available from February 3 to February 10. During this week, it is not possible to find the regular cards of this selection of players because the hybrid cards are replacing them. You can know more about this second edition, clicking here.

There are 23 OTW cards featuring top-players with less than 30 years old who moved to new clubs on this summer transfer window. Here is the list of hybrid card for FIFA 17 Ultimate Team (Winter Edition): 
FIFA 17 Ones to Watch Cards Ratings and Stats

The FIFA 17 Ones to Watch cards boost in rating and stats every time a player gets a new TOTW card. Their ratings just can go up. They can’t go down. In other words, they are in form cards that have the stats of that players highest rated TOTW cards. The ratings of OTW cards should be automatically updated as soon as a new TOTW card gets released.

To understand better how these cards work, let’s look at an example. Lacazette was 84 rated in the FIFA 16 start. If he was an hybrid player, his card would be improved four times until it reaches the 88 rated card of his best TOTW. In the other hand, if for any reason he had a bad season, who bought him would be wasting the extra money paid for the potential stats.

The following image shows you another example of what happens to OTW cards when other cards of that player are released. FIFA 17 Ones to Watch Cards Prices

The hybrid cards prices depend of how well the players performed and how many IF cards they get. That’s why it is so difficult to predict the prices. These cards give the game a fantasy football element.

With the hybrid cards in the game, players have now to make many important choices: do you buy a hybrid card right off the bat, knowing it will cost more than a regular card of an equivalent player? What if a player doesn’t get the TOTW card you were expecting? When do you sell? Do you cut your losses or do you hold onto the card hoping it will rise in value eventually?

We believe that FIFA 17 Ones to Watch cards are probably one of the best investments you can make in FUT 17. When the game starts, most of players will have no idea how these cards work. Many of them will put for sale these cards based in its ratings, not knowing that the ratings can growth during the season. That’s the window opportunity you should take. As soon as possible, try to buy OTW cards of forwards from popular leagues that you believe will perform well and get several TOTW cards. You probably will get your money back even before the first upgrade.


FIFA 17 Ones to Watch Cards Overview

Q: What are Ones to Watch cards?
A: Ones to Watch, commonly abbreviated to OTW, is a new In Form card category assigned to a very limited selection of players, replacing their regular cards from September 30 to October 10 (Summer Edition).

Q: Can a hybrid player’s rating change?
A: Yes! His card boost in rating and stats every time he gets a new TOTW card.

Q: How long FIFA 17 Ones to Watch cards are released in FIFA packs?
A: Seven to Ten days.

Q: How long do Ones To Watch items continue to receive a stats boost?
A: If you have a Ones to Watch item in your club, its ratings will automatically match that of the players latest Team of the Week In-Form until the end of that player’s domestic league season. At this point, the player’s Ones To Watch Item type will continue to carry the last in-form rating he received through FUT 17.

Q: Can an hybrid card be downgraded?
A: Probably no but it is not confirmed yet.

Q: In which FUT packs I can find FIFA 17 Ones to Watch cards?
A: They can be found in any pack with players cards. Obviously, the chances of finding one of these cards are higher if you open a pack which contains more player cards.

Q: It is possible to get a OTW card when opening a free pack like the ones of the Manager Tasks?
A: Yes, it is.

Q: Are FIFA 17 Ones to Watch cards available in the FUT Draft mode?
A: Yes, they are available in all modes, including FUT Draft and FUT Squad Building Challenges.