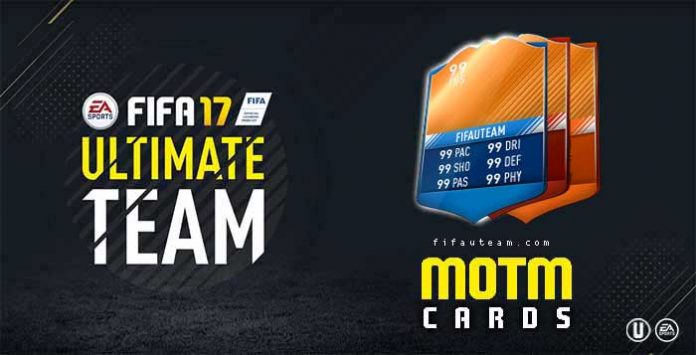 FIFA 17 MOTM orange cards are the most unpredictable In Form players cards of the game. Let’s learn something more about these orange cards.

An orange card is assigned to the best players of these matches, according to EA Sports. They become available in packs for only 24 hours. During this period, the FIFA 17 MOTM orange cards replace the corresponding regular cards. In other words, in the day a player gets his MOTM cards in packs, it is impossible to find his regular card there. Your odds of pulling a MOTM card from a pack are exactly the same of pulling the regular card of that player in another day.

If you own the regular card of a player elected MOTM, your card will keep unchanged. If you want the improved version, you will need to buy the corresponding MOTM version in the market or pull it from a pack in that day. When FIFA 17 MOTM Orange Cards will be available?

The FIFA 17 MOTM orange cards don’t have any periodicity. Usually they are released between March and July, because it is when the tournaments are coming to the end or when domestic Cup finals take place, with predominance for weekdays. However, for FUT 17 we predict the first MOTM card for later November and the last one for June, like it happened in FUT 16. Most of the times, when a player perform well in a Saturday or Sunday match, he only gets his MOTM card in the Monday, because EA Sports doesn’t have a team working on this during the weekends.

Each MOTM card is released only a few hours after the match ends, always at midnight (UK time). It is not possible to have more than one MOTM card for the same game.

The MOTM cards are the most unpredictable of all. If you usually don’t pay attention to what is happening in real world football, then you may not give for them, because they come in packs for only 24 hours.

The ratings and attributes of FUT 17 MOTM cards are usually boosted in one or two points, compared with their last TOTW/MOTM/iMOTM/Hero card or, if it doesn’t exist, their regular cards.

What happens to the MOTM cards’ prices?

Much like TOTW cards, the orange cards tend to fetch the most FIFA coins right after their initial release. As these players are usually only available for a period of 24 hours, the low supply on the FUT transfer market can create price instability, therefore marginal price fluctuations are not too uncommon.

When a MOTM player receives a higher rated inform, their orange card will probably drop in price significantly. The opposite can also happen however.

In the coming weeks, we will add a much deeper explanation to what will happen to the FIFA 17 MOTM orange cards prices in the market.

What you need to know about FIFA 17 MOTM Cards

Q: What is the difference between MOTM and iMOTM?
A: Unlike MOTM cards, iMOTM are only assigned to players in important international football competitions playing by their national teams.

Q: Who chooses the players for the orange cards?
A: Electronic Arts.

Q: What time are FIFA 17 MOTM orange cards released?
A: FUT 17 Man of the Match cards are usually released at 12am / midnight (UK time).

Q: Can a MOTM player’s rating change?
A: MOTM cards ratings remain unchanged after being implemented into FUT 17. However, Winter Upgrades can force these ratings higher.

Q: How long are FIFA 17 MOTM orange cards available in FIFA packs?
A: Usually, these cards are available in packs for a period of 24 hours, although you may see a longer duration in specific cases.

Q: How easy is to find FIFA 17 MOTM orange cards in FUT packs?
A: Your odds to find a specific MOTM card are the same of finding the respective regular card in another time.

Q: In which FUT packs I can find FIFA 17 MOTM cards?
A: MOTM players can be found in any pack with players cards. Obviously, the chances of finding one of these cards are higher if you open a pack which contains more player cards.

Q: It is possible to get a MOTM card when opening a free pack like the ones of the Manager Tasks?
A: Yes, it is.

Q: Are FIFA 17 MOTM cards available in the FUT Draft mode?
A: Yes, they are available in all modes, including FUT Draft and FUT Squad Building Challenges.