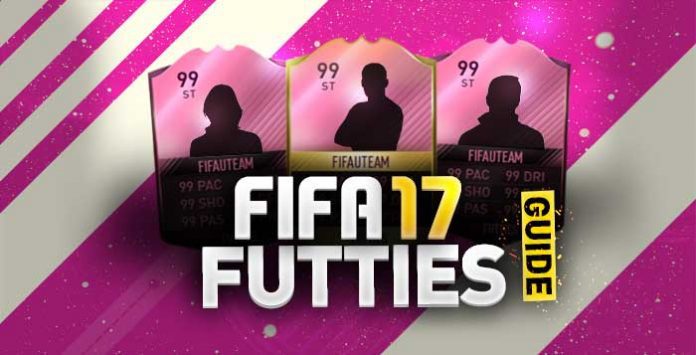 FIFA 17 FUTTIES is one of the last events of the game and, for that reason, we are publishing a guide with everything you need to know about it. On our FIFA 17 FUTTIES Guide, you can learn more about these pink cards, including the release dates, the rules, the predictions, the market behaviour, the nominees, the past winners and the answers to the most common questions.

FUTTIES are special award in-form cards chosen by the FIFA community. They are a kind of FUT Oscars in which FUT fans get the chance to vote in a number of various categories for their favourite players. Each player with the most amount of votes in a category will be awarded a pink FUT card with upgraded stats. Over the course of the six weeks, 30 players will be nominated across 10 categories and you will have the opportunity to vote for your favourite by completing their specific FUTTIES Nomination SBC. By completing the FUTTIES Nomination SBC, you will also receive a pink FUTTIES Nominee item with base stats of the player you voted for. The player with the most completed Nomination SBCs will win each category. Their FUTTIES Winner item will then be made available with boosted stats and feature a gold trim to signify their accomplishment in a separate Winner SBC. Completing the Winner SBC is the only way to get the Winner item. Nominee items DO NOT get an automatic upgrade.

This event made their first appearance in FUT 15 and it is released since then every year in July for about two weeks. This year, it will last for six weeks.

If you own the regular card of a FUTTIE player, your card will keep unchanged. It will not automatically turn pink or be upgraded for winning. If you want the improved version, you will need to complete the specific winner SBC. You will not be able to buy the corresponding pink version in the market or pull it from a pack.

The ratings and attributes of the FIFA 17 FUTTIES cards are usually boosted by one or two points, compared with their last TOTW/MOTM/iMOTM/Hero cards or, if they don’t exist, their regular cards. The attributes have a similar increase but it doesn’t mean that all attributes have to be improved. The position of the players in these cards may change if, during the season, they stand out in a different position.

It is not possible to a player to have more than one pink boosted card because they only get one nomination and you can only complete each SBC FUTTIES winner once. You can have the regular card and the FUTTIES card of the same player in your club. However, you cannot use them both in your squad at the same time. When will be released the FIFA 17 FUTTIES?

FUTTIES season happens once per year. This is the last chance the community has to improve their squads with new players cards. This year, Electronic Arts announced the first release date with one week in advance. From Friday, July 7 through Friday, August 18, join in a 6 week celebration of the best of FUT content released throughout the past season. These are the expecting release dates for the FIFA 17 FUTTIES.

Based on the experience of the previous year, and as you can see in the table above, the FIFA 17 FUTTIES release dates should be the following ones:

Who have higher chances to win the FIFA 17 FUTTIES?

Looking to the winners of the past years, you can take an idea about what can happen this year.

We also made a prediction for FIFA 17 FUTTIES but, as you can imagine, it isn’t easy to guess without even knowing the nominee’s list.

Below are examples of how Francesco Totti nominee and winner pink cards may look. Who have chances to win a FUT Oscar? Who won a FUT Oscar?

No more winners will be announced.

How the FIFA 17 FUTTIES will be celebrated

During the TOTS event, great offers are shared with the FIFA fans, including lightning rounds, new squad building challenges and exclusive players. What happens to the market during the FIFA 17 FUTTIES event?

What you need to know about FIFA 17 FUTTIES Q: What are FIFA 17 FUTTIES card?
A: FUTTIES are pink IF cards voted by the FUT community.

Q: What is the colour of FIFA 17 FUTTIES cards?
A: Pink. They are always pink.

Q: How do I vote for FUTTIE Awards?
A: Complete the Nominee SBC for the player you want to vote for.

Q: When FIFA 17 FUTTIES cards are released?
A: FUTTIES starts on July 7 and the cards are made available through specific SBCs over the course of the event.

Q: Will the items that I get by completing a Nominee SBC have boosted stats?
A: No, the Nominee reward items will have the same stats but will be a special unique pink item.

Q: Do FUTTIE Nominee items get automatically updated if the player wins?
A: No, the winner’s item with boosted stats will be available only through a separate FUTTIES Winner SBC.

Q: Will transferred players only be available through Marquee Tranfers SBCs?
A: No, they will also be available in packs as per usual.

Q: Are players featured in Marquee Transfer SBCs awarded as special items?
A: No, they are regular player items.

Q: How long are FIFA 17 FUTTIES winners available in FIFA packs?
A: These cards are not available in packs. You must to complete specific winner SBCs to get them.

Q: Who chooses the FUTTIES?
A: The FUT community. You’ll be able to vote for your favourite FIFA 17 Ultimate Team players in 10 award categories celebrating their in-game heroics for your FUT Club. After the votes have been tallied, each award category player with the most votes will receive a special pink FUTTIES in-form with improved stats.

Q: How good are these pink cards?
A: They are supposed to be better than TOTW cards but much worse than TOTY and TOTS cards.

Q: Compared with their regular card, how much is the boost of FUTTIES cards?
A: The ratings and attributes of FUTTIES cards are usually boosted one to three points from the best card among his regular, TOTW version or special verion (except TOTS, TOTY, SBC).

Q: Can a FUTTIES player’s rating change?
A: No, FIFA 17 FUTTIES cards ratings remain unchanged after being implemented into the game.

Q: Are FIFA 17 FUTTIES cards available in the FUT Draft mode?
A: Yes, they are available in all modes, including FUT Draft and FUT Squad Building Challenges.