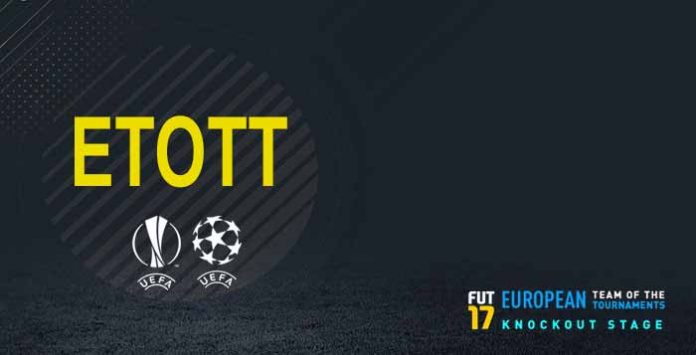 The FIFA 17 ETOTT – European Team of the Tournaments, also known as Team of the Knockout Stage, is a selection of the most in form players on the two most important European’s clubs competition. They will be available in packs with upgraded ratings as unique items during a whole week .

Each week FIFA Ultimate Team assembles the best players from international and club competition around the world. This collection of players is available to challenge in FUT. This limited-time, FIFA 17 celebrates the player performances from Europe’s biggest club competitions: The Champions League and the Europa League.

This year, the Team of the Knockout Stage will be released in new and exclusive blue cards, the same used to reward the best players on the group stage. You will be able to find these cards in packs or in the transfer market, just like the TOTW cards of this week. This FIFA 17 ETOTT includes a very special card: a Record Breaker Ronaldo for his 100th goal in European competitions.

Each year the top European clubs compete to crown the best side on the continent. Below is the full collection of players, based on performance in the Knockout Stage.